Saturday 9: Twist and Shout
1) In the movie Ferris Bueller's Day Off, Ferris climbs up on a parade float and enthusiastically lip synchs this song, encouraging the entire crowd to join in. Do you know the lyrics of "Twist and Shout" well enough to sing along? (Watch the impossibly young Matthew Broderick as Ferris here.) "Shake it up, Baby, now … Twist and shout … C'mon, c'mon, c'mon, Baby, now … Come on and work it on out …" I've got the lyrics down. Unfortunately I'm tone deaf, so I'd lip synch along with Ferris.

2) What other Beatles' song do you know all the words to? All of them. I have loved the Lads ever since this moment, when I first heard his Lordship warble, "Close your eyes and I'll kiss you ..." 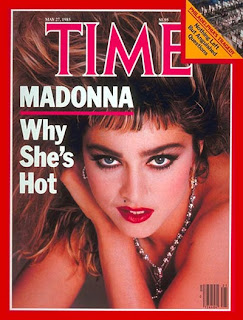 3) 49 years after their American debut, The Beatles are acknowledged as having a lasting impact on both music and culture. What performers on today's music scene do you think will be remembered 50 years from now? As much as I cannot stand her -- and she may be the celebrity that annoys me most -- I have to give it to Madonna. She has ridiculous influence and staying power. Obviously there have been more talented singers since she arrived on the scene 30 years ago, but I can't think of anyone who has had her impact.


4) Paul McCartney is an enthusiastic advocate of the vegetarian lifestyle. Could you/have you tried to "go veggie?" Nope. I saw him at Wrigley Field one hot summer night in 2011 and was in awe of his stamina. At almost 70, he played for hours in that heat without his energy waning, so maybe there's something to that veggie lifestyle.

5) As a young boy, Ringo Starr suffered a severe attack of appendicitis and almost died. Do you still have your appendix? What about your tonsils? Appendix: check. Tonsils: check. Yes, the gang's all here.

6) John Lennon sketched and doodled when he was bored or nervous. Do you have any nervous habits? I play with my hair when I'm nervous, bite my nails when I'm bored.

7) George Harrison loved Hawaii so much he bought a 63-acre estate in Maui. Have you ever visited our 50th state? Yes, twice. Honolulu, Maui, Kona, The Big Island … It's all beautiful. If the airfare wasn't so expensive, I'd like to go back.

8) Yoko Ono was a polarizing character in the Beatles' saga. Has any of your friends ever dated/married someone you just could not stand? Oh, yes! A former coworker, an adorable guy who I'd known since he was very young, fell head over heels for a remote woman I simply didn't trust. It's with great pleasure that I report that today they are very happily married and trying to get pregnant with their second baby. (I eat crow here.)

9) Paul has had dogs his entire adult life, including a sheepdog, Martha, and a black lab, Jet. John was especially fond of a cat named Elvis and a tomcat he found in the snow and named Tim. Tell us about one of your pets. Beside me as I answer this is my cat Charlotte. She is a Woman of Mystery -- she joined our household rather suddenly, and sight unseen, when there was a fire at the local animal shelter and they had to find a place for all the critters -- so I know little about her background. She is dainty, mostly white with calico coloring around her ears, and quite the diva. She keeps my boy cats, and me, in line.