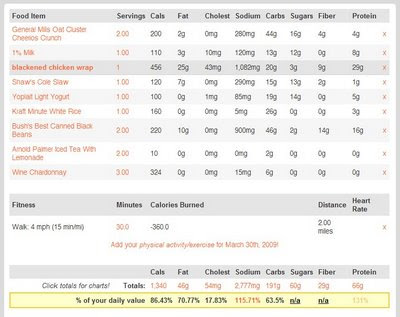 Deleted from my diet/exercise regimen, that is.

I've done very well at tracking my calorie intake and exercise at The Daily Plate at Livestrong.com (sample page shown above). I have been working out weekly with a trainer and have taken what I've learned and revised the way I exercise on my own. I am committed to getting stronger and healthier.

But I am not obsessed.

I got into this with the encouragement of my best friend, who is determined to finish the Boulder Bolder (a 10k race at the end of this month) in less than 60 minutes. I, however, am not training for a race. I'm changing the way I eat and move for a lifetime.

So if today I have a pair of mimosas at lunch with my mom (and I did), if I have eclairs and cheesecake and strawberry shortcake in the same day (and I did), if I take a cab from my front door instead of hoofing it to the bus stop (and I did), all is not lost. I will begin again tomorrow. 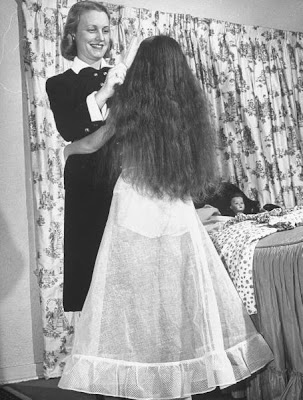 Then we went to a special Mother's Day brunch. It was fancier than her usual lunch haunts, with free mimosas for both of us (I drank hers while she had decaf) and a pair of complimetary roses for her. She went up to the buffet twice -- taking pork and dumplings the first trip and salmon and salad the second time. For dessert, we both had strawberry shortcake. It was great to see her eat and eat AND EAT!!! (My sister's family took her out to dinner yesterday, too!)

Most of all, she promised that we would do this again next year. That was her wonderful gift to me, even though Mother's Day is her day.
Posted by The Gal Herself at 5/10/2009 07:54:00 PM 4 comments: Links to this post

1. What is on the walls of your room? Since I live alone, every room is my room. Thomas McKnight is my favorite artist, and I've got 3 of his prints displayed throughout my home.

2. What type of music do you listen to? Lately I've been listening to a lot of Bruce Springsteen since I'm seeing him this coming Tuesday. (Yea!)

3. What do you want more than anything right now? To be thin.

5. What's you worst fear? Suffering in a plane crash.

6. If you could anything right now, what would it be? Talk to my best friend.

7. What’s the meaningful gift that you’ve received? My friend Kathleen gave me the press plate for the front page of the Chicago Tribune announcing Obama won.

9. Who is your favorite celebrity? Favorite? Um … I'm Team Aniston. Does that count?

10. Could you fall in love with someone that you know must leave? Yes.

11. Share a favorite quote of yours. From Groucho Marx: "East is east and west is west and if you take cranberries and stew them like applesauce they taste much more like prunes than rhubarb does."

14. What were you doing before Sunday Stealing? Putting clean towels in the bathroom.

15. What do you get complicated about the most? I can be pretty complicated all on my own, nothing/no one needs to "get" me that way.

16. What turns you off the most from a potential partner? Smoking

18. When was the last time that you were jealous? This past week.

21. At the moment, what’s your favorite song? "I Will." The Beatles

22. What is you favorite day of the year? My birthday.

24. When was your last one night stand? I've never had one.

25. How many past lovers are too many? For what?

Sunday Stealing: The 2 for 1 Meme