Not as good as the original ... 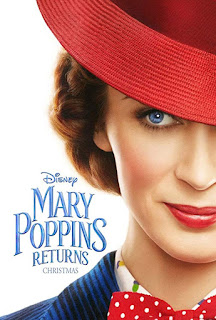 ... but then, how could it be? After all, Mary Poppins was practically perfect in every way.

Mary Poppins Returns is fine. Emily Blunt can't sing especially well, but she moves and speaks like Mary would. Lin-Manuel Miranda is fantastic. He sings and dances well enough for everyone ... in the world. Yes, Dick Van Dyke has a cameo, and if it doesn't touch you there's something wrong with you.

BUT the actor who plays grown-up Michael just got on my nerves. Ben Whishaw plays a weak, overwhelmed man, on the verge of losing everything and apparently heedless of the impact this will have on his three children. Whereas the original Mr. Banks was well meaning but work obsessed, the dad in Mary Poppins Returns is almost clinically depressed, wrestling with the loss of his wife and his dreams and the family home.

None of the songs is particularly memorable.

I'm not sorry I saw it. I genuinely enjoyed some parts. But I was a little disappointed and would have been just as happy to see it on video. EXCEPT that the audience applauded when Dick Van Dyke appeared as Mr. Dawes. I would have missed hearing how welcome he was.

In the decades that I've been going to Key West, I have never visited The Butterfly and Nature Conservatory. I don't know why, really. Just never got around to it. Well, this year, on Christmas Day, I righted that wrong.

As soon as I entered, a butterfly landed on me! It was so cool. I think it was my Cubs t-shirt. Even butterflies want to go to The Friendly Confines. 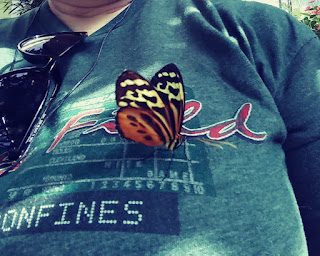 Here's a butterfly having Christmas dinner. They are very still as they eat, sucking the fruit juices in through their proboscises. 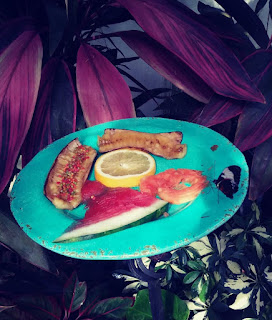 There are two in this shot. Can you spot them? 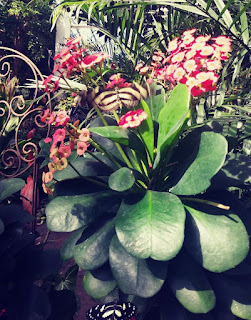 My favorite picture. Pretty and peaceful. 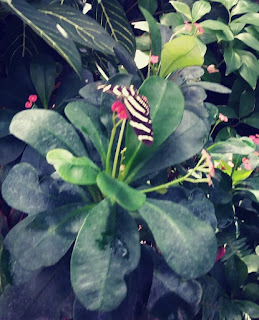 The Conservatory is more then butterflies. There are also turtles and these two: Rhett and Scarlett. 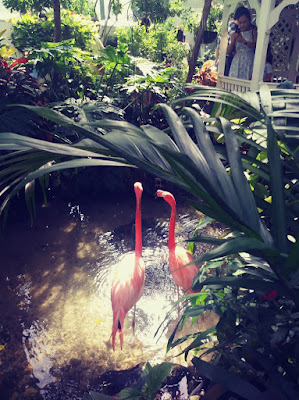 My first stop after the Conservatory was Margaritaville. This City Mouse can only take so much nature! 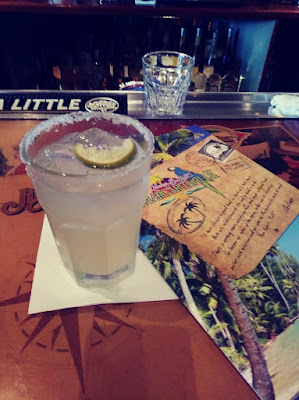 Christmas Eve at the Beach

I was at the southernmost beach in the continental United States, wiggling my toes in the sand and surf and saying hello to The Sandman. 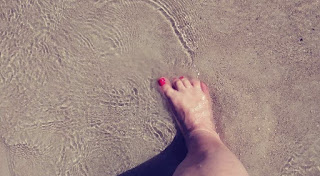 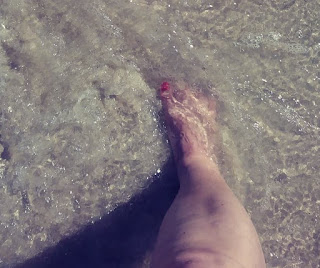 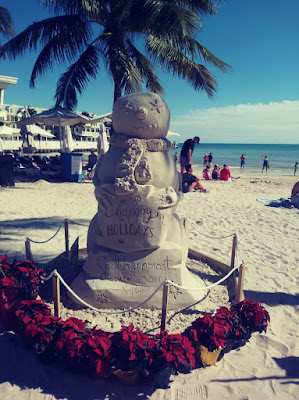 Christmas on the Road

Christmas comes but once a year, and I couldn't let Henry's accident spoil it. I went out of my way to appreciate the decorations in the airports and brought some holiday cheer with me for my hotel room. 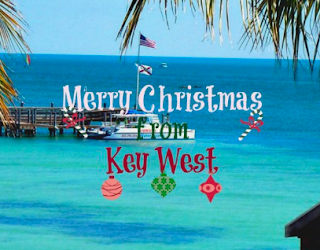 Three and a half of my five days in Key West were fine. And that means they were very good. For me and for Henry.

In October, he was in a terrible crash that shattered his ankle and left him with a traumatic brain injury. He nearly died and was in a coma for two weeks, On the one hand, his recovery has been miraculous. His memory is in tact. His motor skills are fine. His ankle has been rebuilt. But he is still not well. Brain injuries take a long time to heal completely. He is still on a cocktail of medications and he still drinks too much -- at least two or three drinks a day. All this combined can leave him moody and erratic.

Day One: His birthday. He was waiting for me in the airport Saturday evening. What a sight for sore eyes! He looks the same. His hair is longer, since getting to the barber shop is not a priority, but it looks good. He and Reg had a little tempest over where we'd go for his birthday dinner. Once we settled on Italian, everything was fine. We all chatted amiably, everyone seemed happy. I was in my hotel room before 10:00 PM, but that's OK. It had been a long day of travel and emotionally fraught -- I hate flying to begin with and was worried about my reunion with Henry and Reg. It was good to get to bed, feeling the dinner had been a success.

Day Two: A movie and the Royals. I took an Uber to their home and visited with Henry and the dogs while Reg slept. (He's working very strange hours around the holidays.) I was happy to see how involved Henry was with "the fur circus." Initially, after his accident, his lack of concern for the dogs he'd always doted on worried me. I'm happy to report he's old self again when dealing with "the puppies."

He was watching a PBS special about Queen Victoria when I arrived, so I opined about reports that Meghan and Kate are not getting along. He became snarky with me. "Who cares?" Well, I do, obviously, I replied. And then I said, "I suppose Royals are only interesting when they're in period garb?" He laughed and we were fine. Here's the thing -- I was an invited guest in his home and he's not a child. He can't be a jerk towards me. I deserve better than that (everyone does) and while I will make allowances for his condition, I won't infantalize him.

We had pizza and watched a movie. We laughed a lot. It felt comfortable. I am sorry that he hates being touched because I just couldn't help myself -- I did hug him frequently. It was so good to see him so well again!

Day Three: A late lunch and tall tales. Christmas Eve. I felt bad that I couldn't go to church, but it just wasn't logistically possible. And I know that being there for my friends was a way of honoring Jesus, so I made peace with it. We got along fine, and after our meal, Reg joined us and we laughed a lot. But I could see Henry was getting tired. He was a bit like a key wound toy, winding down and getting slower somehow. He snapped at Reg, "Why are you looking at me as though I have two heads?" and he said some things to me that were just batshit crazy. He wasn't lying exactly. I believe he was completely sincere in everything he said. I just don't see how these odd things could have happened. I didn't confront him. I mean, why? He had a brain injury and he's doing the best he can, and these silly flights of fancy don't really matter.

I do worry about him at work, though. Does he say wacky things to his coworkers? Are they able to chalk it up to the brain injury and meds? I would hate for him to be doing damage to himself professionally through no fault of his own.

Day Four: "Don't be a dick." Christmas Day. Our only really bad day. There had been drama about whether to eat out or cook in. I told both Henry and Reg, over and over, that I didn't care, that the important thing was that we three were together. They decided we should eat out. OK, which restaurant? Back to Day One. Guys! I don't live here! This is your turf, not mine!

Ironically, we ended up at my favorite little Key West restaurant, Duffy's. It's not haute cuisine, but I've never had a bad dish there. I was happy, but it was definitely a compromise choice for them.

I'd been so excited about my gift for Henry: a Frida Kahlo tshirt with "Viva la Vida" emblazoned across the front. He loves Frida, the message was positive, and I was going to tell him that I hoped that he could turn his accident into art the way she did hers.

He took the package from me and said, "Oh, a shirt," before he even opened it. Then he held it up and said, "Who is this supposed to be?" He knew it was Frida Kahlo. The tshirt designer just didn't include her unibrow.

"Don't be a dick," I said. I told him how happy I'd been with my find, how I looked forward to presenting it to him and making a connection between his writing and her art. "But you're not going to let me have that Christmas joy, are you?" He literally just shrugged. He never thanked me for the gift.

I asked both Reg and Henry how their families were this Christmas. Reg was going to call his parents Christmas night so they could open their presents "together" over the phone and over the miles. Henry said he wasn't calling his mother. He hadn't called her on his birthday, either, as was their custom. He just didn't feel like having "the same conversations every year." Wow. So I knew I wasn't the only one getting Henry's "dick treatment" on Christmas.

Strangely enough, the dinner turned around when we started discussing the Robert Blake 2005 murder case. I don't remember how we got on the subject, but I recalled a lot about it and Henry was really quite animated when we were talking about it. Not your typical Christmas fare, I know, but then this hadn't been our typical Christmas!

Day Five: Silver bird. I told both Henry and Reg that, if I needed to get myself to the airport, I was more than capable of doing so. I'm a grown up, I enjoy traveling alone, it will be fine. No, they both said they wanted to say goodbye.

I'm happy to report that Henry was wearing the Frida shirt! "So you do like my present!" I exclaimed. He just shrugged. But he was wearing it. And he told me that he looked online to see what "Viva la Vida" meant in Frida lore. This meant a lot to me.

He was pretty silent at breakfast, nursing his bloody mary. Reg and I picked up the conversational slack. As I was boarding the plane, Reg held me tight and didn't want to let me go. It helped him to have me there. It was good for Henry to have someone other than Reg to talk to and it was good for Reg to have someone see, firsthand, what goes on with Henry on a day-to-day basis.

Henry is trying. Henry is healing. His accident exhausted him, depleted him. But he's working at getting well. I just hope that next year, he will be even better and stronger, and more of his sweet old self.