A moment in time

A long, long time ago, in the 1980s, I dated a completely lovely man. We shared a lot -- we both love movies, we could both recite dialog from Monty Python's Flying Circus, we were both politically involved (and it wasn't easy for liberals like us to keep our spirits up during the Reagan years). He was tall and had really great hair.

But I didn't love him. He seemed a little too wimpy for me when I was into partying and coke and bad boys. So I threw him over for a much better looking, more charismatic and far more tortured bastard who broke my heart and was, without a doubt, the worst thing that ever happened to me.

I've remained in touch with the completely lovely man for all these years. I'm proud to report that I've been invited to the graduation ceremonies for each of his children and his wife and I are Facebook friends. This year's Christmas card included a photo of their first grandchild.

There are times that I wonder about the path not taken. What if I'd stayed with the completely lovely man and threw over the bastard? Would I now be a happy Wisconsin grandmother?

No. I might be a Wisconsin grandmother, but I wouldn't be a happy one. And he wouldn't be happy with me, either. Because I didn't love him.

Why am I writing about this today? Because I heard that Glenn Frey has died. He wrote and performed a song that was popular at the time, "The One You Love," and expressed exactly how I was feeling in those days. Hearing that song reminds me that I made neither the right nor the wrong choice because I had no choice at all. I didn't love him.

"Are you gonna stay with the one who loves you, or are you going back to the one you love?" The song captured that moment in time, and I'll always be grateful to Glenn Frey for exquisitely putting words to my feelings.

So I guess it's HIllary 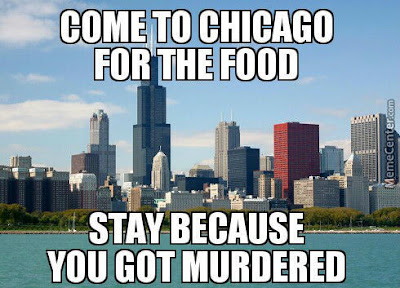 I watched the Democratic debate last night and was very proud of my party. Proud to be a liberal. Happy to know I could easily vote for any of the three on stage last night.

Despite my respect for Bernie Sanders and the way he, like Gene McCarthy, has touched the hearts of the young -- I love, love, love listening to my 15 year old nephew rhapsodize about Bernie -- I'm ready for Hillary.

No, I don't especially like/trust her. I never have. But she's smart. She's capable. And she gets the gun issue. Bernie doesn't. Maybe it's because, as he keeps telling me, he's from a rural state. I live in a city awash in guns. Chicago doesn't have time to wait for Bernie to evolve to where Hillary and Obama already are.

Also, I like winning and one thing Democrats have on our side is demographics. I don't see us being able to take advantage of that with Bernie Sanders at the top of the ticket.  Perhaps this is anecdotal, but every one of my friends of color views Bernie with deep skepticism. He's simply not connecting. Again, maybe it's the rural/urban divide. I know the gun issue, combined with what sounds like lukewarm support for Obamacare (and, by extension, Obama), hurt him among my Black and Hispanic friends. At any rate it will be hard for him to reach 270 Electoral Votes without Chicago (and as goes Chicago, so go IL's 20 votes). I don't imagine Los Angeles is all that different from Chicago in this regard. California has a whopping 55 Electoral Votes.


(Of course, the GOP might be suicidal and actually nominate Trump, which means everyone who isn't both white and crazy will be out to vote Democratic. But we can' t count on that.)

If Bernie Sanders becomes my party's nominee, I will open my wallet and my heart to him. I'll phone bank, too. I won't feel I've horribly compromised my ideals. I'll proudly wear my "I VOTED" sticker. After all, Clinton/Sanders/O'Malley agree on much, much more than they disagree on, and this is too important to be childish.

But I hope it's Hillary I'm sending money to and phone banking for. Because I hate gun violence and love winning.