Thirteen facts things about tooth loss. This is very top of mind for me these days.

2. More than 36 million Americans don't have any teeth at all, though 90% of these people have dentures.

3. The primary cause of tooth loss is periodontal disease. This is a bacterial infection that destroys first the gum and then the bone. (This is me. I'm so typical!)

4. I didn't start flossing until my 30s. I wish I could get those decades back. Flossing can help prevent periodontal disease. (In my case, I ended up getting multiple crowns when I was in my 30s and guess what: they're all wearing out.)

5. Genetics also play a role. If your parents suffered from receding gums (I'm raising my hand), you're likely to, as well.

7. Tobacco use can add to the plaque build up, which leads to tooth decay and gum disease and tooth loss.

8. So does grinding your teeth. You're putting extra pressure on your gum line, which leads to gum recession and -- you guess it! -- tooth loss.

9. To help you avoid all the expense and discomfort of dealing with tooth loss, try to have your teeth cleaned by the dentist twice a year. This is the best way to make sure all the plaque is removed.

10. Stop thinking of mouthwash as something to keep your breath fresh. Instead, thinking of it as a tool in your tooth-saving arsenal and switch to an anti-bacterial rinse.

11. Eat more tooth-healthy foods. What makes a food "tooth healthy?" If it stimulates saliva, it will help wash away bits of food and bacteria that get trapped in your teeth. Fresh fruits and vegetables are often considered "tooth healthy."

12. Drink tap water. Your municipality likely puts fluoride in the water, and that can help fight decay.

13. Brush after every meal. Carry a toothbrush with you if you're eating away from home. (Yeah, I never did this, either. But then, I'm looking at more than ten thousand dollars in dental work, so ...)

Me and the Paparazzi

No, no photographer is stalking me with his camera. But I am thinking about them today because of today's WWW.Wednesday post. It's decorated with a shot of JBKO reading on the hood of her jeep. I love this photo, even though it was taken without her knowledge and was undoubtedly an invasion of her privacy.

On July 29, 1989, Jacqueline Bouvier Kennedy Onassis turned 60 years old. Photographers swarmed all over Martha's Vineyard to see how she would celebrate. A lunch with glamorous friends? A dinner at a bistro with family, including her son, the Sexiest Man Alive? Only one had her figured out.*

Jackie and her companion, Maurice Templesman, took his boat out on Menemsha Pond very early in the morning. He stayed on the boat but she swam in to shore. Assuming the car behind hers was empty, left there by someone else enjoying the water this Saturday morning, she obviously thought she was alone. She removed her bathing cap, peeled down her bathing suit (fortunately her back was to the car, its unseen occupant and his camera!) and toweled off. Then she donned a striped pullover, wrapped her hair in a towel, and climbed onto the hood of her car to read while she waited for Maurice. 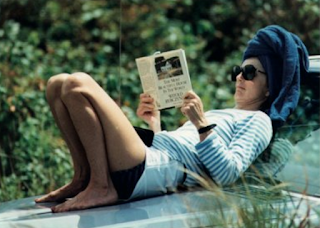 A morning swim, a good book, and a man she loved. I'm glad that's how she celebrated her 60th.

I also wonder if I should know all this.

By 1989, she had been the most famous woman in America for nearly 30 years. Only Princess Diana had surpassed her as a cover girl. She was photographed every time she left her home -- whether the White House, her Fifth Avenue apartment, The Christina, or Red Gate Farm on Martha's Vineyard. Every. Time. As this picture illustrates.

She hated it. She took photographer Ron Galella to court and a judge mandated he had to stay 25 feet away from her. When he violated the court order, Galella lost his right to photograph Jackie or her children ever again. At the time, she was pilloried in the press for imperiously stomping all over The First Amendment. In retrospect, I wonder if, had Princess Diana taken a similar firm stance, she might not be alive today. (BTW, Ron Galella died last month. I wonder if Jackie now has to hide behind trees and pillars in Heaven.)

So I consume paparazzi product, even as I empathize with their targets. I'm conflicted about this.