Being DONE! makes me happy. Got out of the office early today and used the time to do all my laundry. Peapod brought most of my groceries.

So I'm DONE! Tomorrow I'll wake up without any of those major, daunting time suck chores awaiting me.

HURRAY!
Each day in August you are to post about something that makes *you* happy. Pretty simple. And, it doesn't even have to be every day if you don't want it to be. It's a great way to remind ourselves that there are positive things going on in our lives, our communities, and the world.

"Joe Nathan is no longer a Cub." 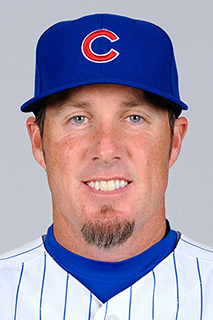 Joe Nathan is 41 years old, which makes him ancient for a ballplayer. The Cubs were his 5th club. At one point, he was an All Star, but that was 8 years ago. Last year, at age 40, he went through Tommy John surgery for a second time. The Cubs thought he still had enough in the tank to sign him during his rehab.

I saw his first game as a Cub and fell in love with him. His first pitch -- for his new club, after his rehab -- was a strikeout! Come on, this is worthy of The Natural. I love it when life imitates art.

But today, the Cubs let him go.

This is so fucking cruel. Imagine having everyone tell you you're past your prime but no, you insist you're not. You have complicated surgery and endure an arduous recovery process ... and get signed by the best team in baseball.

You take the ball, go out there and perform well. You're back, baby!

But the Cubs, being the best team in baseball, are enjoying an embarrassment of riches. Too many good players. Young players. 24-year-old Jorge Soler is healthy and back from the disabled list and someone had to go to make room.

Six months ago, I didn't care one whit about Joe Nathan. But tonight, hearing Cub announcer Len Kaspar say, with callous casualness, that "Joe Nathan is no long a Cub," just broke my heart.

I know, I know ... He is a grown man who is lucky enough to be paid handsomely to play a boy's game, I get that. But he's still a person and I can't imagine what it was like for him to get the news this afternoon.

Here's hoping Joe Nathan turns up with another club. And if he does, should he do damage against my guys in Cubbie blue, I swear I won't blame him one bit.