I saw her twice today

There's a stray cat hanging around my condo building. First I saw her disappear under a car in the neighbor's driveway. She moved so fast, I thought I'd imagined her. Then, when I went downstairs to get the mail,  I saw her on our porch. I was trying to figure out how I could get her up here and keep her segregated from Connie and Reynaldo -- social distancing is the order of the day for cats, too -- when the clanging of our elevator spooked her and she ran away.

I didn't chase her. Even if I did catch her, I didn't see how I could keep her comfortable and safe until I could get her to the vet on Monday. (If the vet would even be open on Monday.) Reynaldo is 16 years old. That's the equivalent of an 80 year old person. Now he still leaps and runs around and I believe that, except for his history of kidney trouble, he's healthy. But he's my responsibility and I have to be careful what/who he's exposed to.

Similarly, I have to protect Connie. She's 7 (or about 45 in human years) but she's had myriad health troubles. She has a chronic upper respiratory infection that manifests itself in runny, light-sensitive eyes. Her eyes are bright now but it's taken vigilance to get her healthy and keep her healthy. Plus, she's been exposed to FIP, a form of (wait for it) feline coronavirus. The vet advises me that she can live a normal life, until the opportunistic virus turns a simple malady, like a cold, into something fatal.

I made eye contact with the cat on my porch. I know I could care for her and come to love her. But I can't right now.

At least it won't be too cold tonight.

She looked very clean and healthy. Maybe she belongs to some unwise owner who let her roam and by now she's found her way home.

Because I can't save them all. I want to, but I can't.

1) This wistful song is about a love affair that ended. What song reminds you of a long-ago love? "Shameless" by Garth Brooks.

2) It was written by Lois Blaisch, a singer-songwriter who performs at clubs around Los Angeles and has sung outdoors at Disneyland. Would you prefer to attend a concert indoors, or outside under the stars? Indoors. I'm not a fan of hot weather, and these events tend to take place in the dog days of summer.

3) This week's featured artist, Tiffany, appeared on the TV talent show Star Search when she was just 14. She came in second. Though she was disappointed, she admits she learned from it. She studied the singer who won and says it made her a better performer. Can you recall a time when you weathered a tough time and came through stronger? In 2011, I had a cancer scare and a hysterectomy. The ovarian cyst turned out to be blissfully benign. But the summer/fall of tests, surgery and recovery was a tremendous learning experience for me. I learned about my own body, about how I face adversity, and the luxury of trusting and leaning on my friends.

4) Early in her career, she toured Alaska, opening for country legend George Jones. Have you ever visited our 49th state?  No. It's a 6 1/2 hour flight. There are so many places that are nearer that I'd rather see or return to.

5) Tiffany provided the voice of Judy Jetson in 1990's Jetsons: The Movie. Which cartoon did you enjoy more: the space-age Jetsons or the pre-historic Flintstones? Ya-ba-dab-a-doo! I think it's the car. 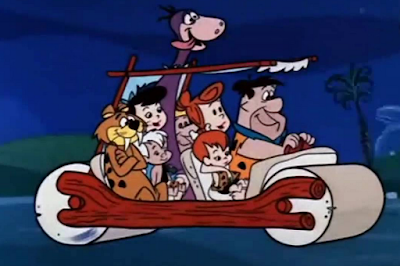 6) In 2007, she appeared on VH1's Celebrity Fit Club and lost 28 lbs. Are you making an effort to stay fit during this stay-at-home period? Every now and again I take a stab at it. For example, on Friday evening I went to the farther away grocery store and carried my bags home, instead of taking an Uber. Yes, a long walk up an empty street to the grocery store was the highlight of my Friday. Maybe my whole weekend!

7) In 1987, when this song was popular, Aretha Franklin became the first woman inducted into the Rock and Roll Hall of Fame. What's your favorite Aretha song? Last night, this one was piped into the grocery store and I sang along, so I'll go with it.


8) Also in 1987, third-generation race car driver Marco Andretti was born. Are you a race fan? Nope

9) Random question: Do you find it easy to sit still, or are you fidgety? Fidgety.