42. What is the stupidest pet that you ever saw? Nothing springs to mind. Sorry.

44. Where you surprised when Jim Parsons came out? Kind of. I mean, he seems rather asexual.

46. We currently have a person who plays both this meme and Saturday 9 who signs in to Mr. Linky every week. Yet, if you click on that link, you are told that only “members” can read the blog. Why do you think that person even bothers to sign in or for that matter, do the meme? (Don't misunderstand, we have no rules and we aren't angry. But it is damn peculiar, no?) Who is it? I wanna know! This leaves me as frustrated as when I read a blind item on Gawker.

47. Have you ever driven a Ferrari? No. But I have driven a 1971 Chevy Impala. I don't imagine the experiences would be similar.

48. What do you call those little plastic things on the ends of shoelaces? Ah ha! I KNOW THIS! Aglet.

50. Do you believe in magic? I could tell you about magic, it would free your soul. But it's like trying to tell a stranger about rock and roll.

53. Explain what you think about hippies. The same as I think about rotary dial phones and antenna TV. 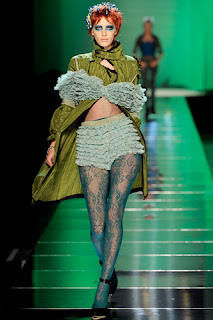 56. What are you wearing right now? A little something from John Paul Gaultier's Spring line. It's so very me.

57. John Edwards had a mistrial. How do you think he conducted himself after the verdict? Well, I was glad that he finally publicly acknowledged little Quinn. And while I'm glad he believes God isn't done with him, I'm afraid I am. Exit Stage Left, sir.

58. Did you watch the series finale of House? Nope.

59. You may need to go back a long way if you are old like Harriet. Who was the last person who asked you out? (Or that asked you out. Same dumb question either way.) A cab driver who heralded from a foreign land asked me if I felt we had "a love connection." Does that count?


60. Do you have any collections? I have accumulated a lot about the 1960s. I suppose we could consider that a collection.