1) In this song, Louis Armstrong calls his girl "baby." What's the last endearment someone used when speaking to you? My oldest friend always ends our calls by saying, "Love you, Dear!"
2) He sings that losing his love made him cry. Do you cry easily? No. Though I do cry more than I did 15 or 20 years ago. Life has gotten more difficult, and I've had therapy.
3) Louis was born in New Orleans, a city famous for music and cuisine. What's something you love about your home town? Pizza. Here in Chicagoland you almost always have a choice of deep dish or thin crust. I was in Key West recently. Restaurants down there should be ashamed of themselves for what they call "pizza." To qualify for the title, a pizza must be tomato sauce/gooey cheese goodness. Don't settle for less! 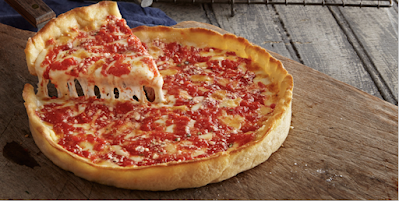 4) At age 11, Louis unwisely fired a pistol during a New Year's Eve celebration and was sentenced to 18 months in a juvenile detention facility. It was there that he met music teacher Peter Davis, who believed in Louis and taught him to play cornet and bugle. Tell us about someone who believed in you and made your life better. I miss my boss Aaron. He made me feel valued and heard. Aaron has only been gone two weeks. Maybe I'll come to like this new boss as much. (OK, I doubt it.)
5) Louis would say that arrest changed his life for the better because it was at the detention center that "me and music got married." After his release, he began playing on streetcorners, or in honkytonks ... any place he could hone his skills. What is something you have worked hard to be better at? Every day I try to be better. Period. Full stop. I can always be a better person. That's what I concentrate on.
6) In the late 1920s, Louis led a jazz band called The Hot Five. His wife, Lil, believed he was too talented not to receive star billing. He just didn't feel ready. She went behind his back and convinced the management at Chicago's Dreamland Cafe to advertise: "The Hot Five, featuring Louis Armstrong: The World's Greatest Trumpet Player." It worked! At the end of the gig, Okeh Records signed him to a recording contract. Can you think of a time when, like Lil, you were glad you asked for forgiveness rather than permission? Often in my work. Sometimes clients have to see how something looks before they realize I was right to break the rules.
7) In 1932, the year this record was popular, the son of aviator Charles Lindbergh was kidnapped and killed. This famous case inspired Agatha Christie to write Murder on the Orient Express. Have you read the book? Seen the movie, the remake or the miniseries?  I've read the book and seen both movies. The 1974 version is better, much closer to the book.
I haven't seen the Britbox TV version, but I've heard good things about it.
8) Another aviator was in the news in 1932. Amelia Earhart flew 14 hours from Newfoundland to Londonderry. What is the longest flight you've ever taken? Chicago to Honolulu is over 9 hours. But worth it!

9) Random question: You have the opportunity to travel safely in a time machine. Would you go back to the past, into the future, or say, "no thanks, I'll stay in 2022?" I think I'll stay put. But thank you for offering.