"No hate. No fear. Everyone is welcome here." 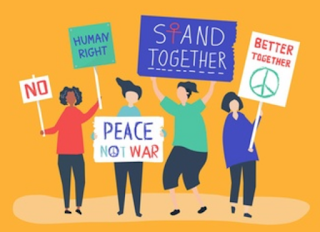 So went the chant of the youth-led peace march through my hometown. Recently, swastikas and ugly white supremacist graffiti appeared at the local high school. Black, Muslim and Jewish students are frightened.

The village came together for a march from the high school to the shopping district. Students led the way. Faculty members had bullhorns. There were grandparents holding the hands of their toddler grandkids. There were singles marching with their dogs. There were entire families marching.

The show of support was inspiring. But it left me indescribably sad. No kid ever hated high school more than I did. But I never once felt afraid to go.

"A youth" has been identified as "a person of interest" in the police investigation. I suspect the perpetrator is a student who wanted to stir things up without actually understanding the ramifications of his actions. But then I think of Dylan and Eric and all the other disaffected teens who have killed their classmates.