1. What did you do in 2016 that you’d never done before? Watched the Cubs in THE WORLD SERIES!

2. Best thing that happened to you was... Watching the Cubs in THE WORLD SERIES!

3. Did anyone close to you give birth? Two coworkers gave birth, but they were nowhere close to me when they did it.

4. Did anyone close to you die? Yes, I had a tough September. Mindy's mom, Katie's brother and Henry's friend.

5. What countries did you visit? Red State Florida and Tennessee. No kidding. Being from true blue Chicago, it felt like I was in a different world.

6. What would you like to have in 2017 that you lacked in 2016? Health. I've been weary and sick for so long, beginning in late December 2015. So far we know everything I don't have -- we've eliminated diabetes, thyroid disease, malfunctions of liver/kidneys/hormones and autoimmune disease. But what is bedeviling me? In 2017, we'll test me for sleep apnea. Wish me luck. Sleep apnea is really not that hard to treat, and it will be such a relief to finally have an answer!

7. What dates from 2016 will remain etched upon your memory, and why? November 2. Game 8 of THE WORLD SERIES. 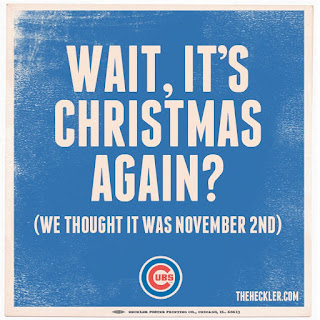 8. What was your biggest achievement of the year? Getting through it. Really, except for the Cubs, this year really sucked.

9. What was your biggest failure? My home and finances are still a mess.

10. Did you suffer illness or injury? I began the year with c. diff. It's a tenacious gastrointestinal malady. You don't want to hear any more about it, trust me.

11. What was the best thing you bought? My new mid-century modern sofa. 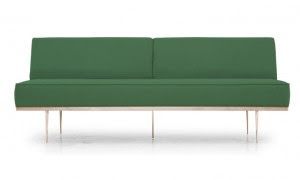 12. Whose behavior merited celebration? The Chicago Cubs, who won THE WORLD SERIES!


13. Whose behavior made you appalled and depressed? Donald Trump. And, if you think it's OK to mock the disabled, Hillary was right: you are deplorable. My uncle suffered mightily with Parkinson's, so this is very personal to me. 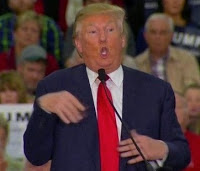 14. Where did most of your money go? Well, I spent more on that sofa than I should have. And I had to fork over special assessments to pay the exterminator because my condo building had bed bugs. (Really, 2016 was awful for me.)

16. What song will always remind you of 2016? "I'm just like my country, I'm young, scrappy and hungry and I'm not throwing away my shot."

17. Compared to this time last year, are you: (a) happier or sadder? (b) thinner or fatter? (c) richer or poorer? I suppose I'm happier than I was New Year's Eve last year, but fatter and maybe not poorer but certainly not richer.

18. What do you wish you’d done more of? Exercise.

20. How will you spend New Year's Eve? Cocooning. I do not wish to leave the house tonight.

21. Quote a song lyric that sums up your year. "There is no more status quo. But the sun comes up and the world still spins." Hamilton again. "What'd I Miss?"

22. What was your favorite new TV program? This Is Us

24. What was the best book you read? The Chairman, James Kaplan's bio of Frank Sinatra.

25. What was your greatest musical discovery? Lin-Manuel Miranda. 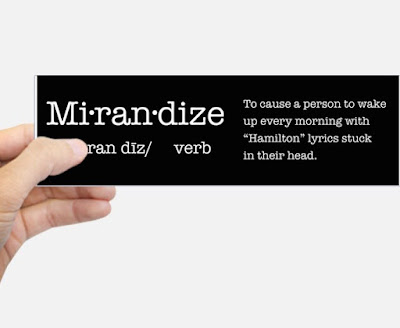 26. What did you want and get? Hamilton tickets.

27. What did you want and not get? The winning lottery numbers.

28. What was your favorite film of this year? Jackie was riveting. Since it deals with rage and grief, it's not a feel-good film. But I thought it was important. For me, the takeaway was that we can handle what we must. She sure as shit did. 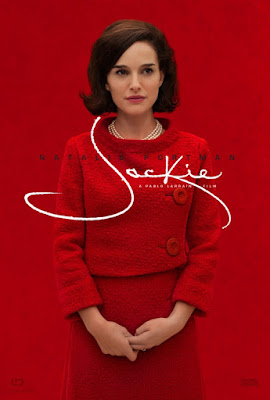 29. What did you do on your birthday, and how old were you? I took myself to Graceland this year for my 59th birthday. I had a wonderful time, but it was sobering. After all, I've now outlived The King by a good long while, and that made me sad. He deserved a longer, happier ride.

30. What one thing made your year immeasurably more satisfying? The Cubs won THE WORLD SERIES!

31. How would you describe your personal fashion concept in 2016? I've embraced wearing Cubs gear everywhere and anywhere. 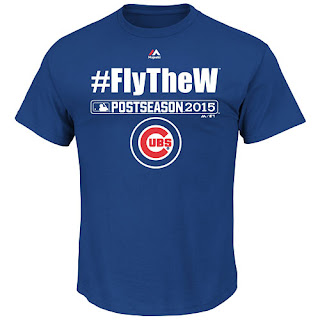 33. Which celebrity/public figure did you fancy the most? Henry Talbot. He was Lady Mary's yummy second husband on Downton Abbey. The actor's name is Matthew Goode. He was also yummy in The Good Wife. 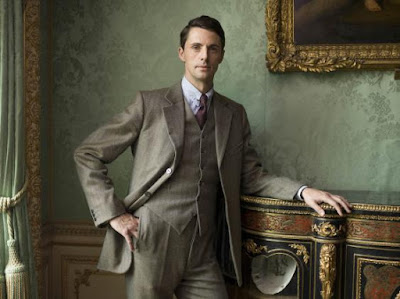 34. What political issue stirred you the most? Which major Presidential candidate will choose Supreme Court justices over the next four years? I believe in women's and LGBT rights, so I am worried about the outcome of the last election.

35. Who did you miss? My dad, my grandparents, my uncle. Cub fans all. They should have been here to see and celebrate the Cubs win THE WORLD SERIES!

36. Who was the best new person you met? I suppose Dru. He a design guru at the office and we clashed a lot at first. But then we began circling one another warily and now we admire one another's strengths. In 2017, he promises to help me learn a new software program. That will be nice. I like learning new things.

1. In this song,Tammy sings of being able to hear "the breeze from the bayou." What sounds can you hear as you answer these questions? The humidifier. It's a consistent hum that turns into white noise pretty quick.

2. This week's song was the theme of a popular movie about a girl who grew up on a houseboat in Mississippi. Looking back on 2016, did you spend much time on or around water? Not until this month. I went to the Keys for Christmas and this year I discovered a more rural, working side to the islands. Here again is the tugboat I saw. I love how little and tough it looks, especially when compared to the all the pleasure boats I routinely see down there. Reminds me of a freight train's caboose. 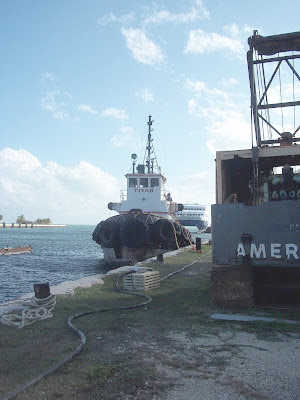 3. In addition to being an Oscar-nominated actress, this week's artist, Debbie Reynolds, was a big movie fan. She amassed an amazing cache of movie memorabilia. Do you collect anything? I suppose I collect books. I'm drowning in them right now. I must go through and organize and perhaps even part with some ... though doing so breaks my heart.

4. Though she never won a competitive Oscar for acting, Debbie Reynolds was awarded the Academy's Jean Hersholt Humanitarian Award earlier this year for 60 years of charity work. While she supported many causes throughout her life, one she was closest to was The Girl Scouts. She was not only a Scout herself, she was a leader when daughter Carrie was young and a fundraiser throughout her life. Were you ever in Boy or Girl Scouts? I was a Brownie, Junior and Cadet. At the time, I had no choice because my grandmother was the president of the local council and it would have been a small-town scandal if I wasn't in a troop. I'm glad now that I did participate. I learned a lot and have some very nice memories.


6. The New Year's Eve fireworks celebrations in both Disney World in Florida and Sydney, Australia coordinate pyrotechnics and music. Are you expecting either fireworks or live music on your New Year's Eve celebration? Only on TV. I choose to cocoon tonight.

7. According to the National Insurance Bureau, more cars are stolen on New Year's Eve than any other single day. Are you confident your vehicle(s) will be  safe and sound this Saturday night? No car.

9. Looking back on 2016, what surprised you? My guys surprised and delighted me.

Isn't it nice when things turn out better than you thought?

Nothing ever goes smoothly with my friend Mindy. Thursday and Friday were the perfect example.

Weeks ago -- on December 5, to be exact -- Mindy and John and I agreed we would get together for the holidays on Friday, December 30. 1:00 at a restaurant/bar John and I favor called Rudy's. Yea!

John never checks his phone when he's with people -- and I love that about him -- so he didn't get her message until late Thursday and there was much, much drama. Where is he? Then, when he said he couldn't roll it back because he has a standing date to go to Zoo Lights with his cousins every December 30, another flurry of emails and texts: Can we get together in January? What about February?

FEBRUARY? Why book a date that far out when we know Mindy will change it anyway? The stress of meeting up with this woman is wearying. As I was moving important dates from my 2016 calendar to my 2017, I noticed three times I'd penciled "Mindy" in -- of course I used pencil -- and three times she cancelled.

After much agita and stress, she and I met Friday at 3:45. On the way into the restaurant, I passed to twentysomething women shivering in the cold, waiting for their friends. One was talking animatedly about her new, Printer's Row apartment. Excited about their prospects for the new year in the big city, just like Mindy and I once were. It was a sweet moment for me. 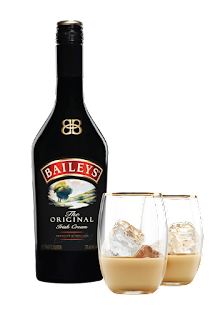 Of course we had the "end of the world as we know it" conversation everyone wants to have with me about Trump, but once we dispensed with that we had a lovely time.

I ate too much, drank too much, and laughed a lot. Which made her gift all the sweeter. She gave me a vertical pendant with the word LAUGH. She says that looking back over the years, the times she's laughed the longest and hardest, she's been with me.

I gave her a brooch from the Metropolitan Opera gift shop. It was the charity chosen to honor her mother in lieu of flowers when the lady passed, and I thought this gave Mindy a way to wear her mother over her heart. This made her happy, which made me happy.

I consider last night my New Year's celebration, and it ended up being a nice one.