No, I got the stubborn gene

My aunt is a hard case. But I'm tougher. Her aggressive Trumpiness has alienated many of the people who have known her the longest. Her former brother-in-law, with whom she's shared a friendship since she began dating his brother back in 1963, has "unfriended" her. Their relationship could withstand divorce, but not Trump.

Her oldest granddaughter was once her favorite. "A spitfire," she used to called Alexa. They shared two passions, mystery novels and Grey's Anatomy. They used to regularly trade books and exchange texts about Meredith Grey. My aunt was unaware that, last month, Alexa earned her MFA. They no longer communicate, since the younger woman has gay friends and black friends and just can't listen to Grandma's Trumpy tirades.

Her oldest son is the one that seems to hurt the most. But as he told me, it's hard to handle it when the woman who taught you right from wrong and emphasized the importance of Christian values turns out to be loud and proud of her intolerance. She often tells me all that flows between them now is radio silence.

When she loses her temper, she loses her reason. She has scolded me publicly for my Facebook posts and has shared some jokes and opinions that left me, like her son and brother-in-law and granddaughter, appalled and disillusioned. I'm confused as to where her sense of grievance comes from. She was born white and raised Protestant in a solid middle-class household. That's like getting 5 of 6 numbers in the lottery. (If only she'd been born a man, she'd have won it all!)

But before I block her and unfollow her, I stop and think and remember. She's the only person left alive who attended my parents' wedding. She's one of two people on earth who held me as a baby. When I was a little girl, I looked at the framed portrait of JFK on her nightstand, so I know that somewhere in there beats an idealistic heart. And I know she loves me, despite my "libtard" tendencies.

So, to curtail her MAGA toxicity in my presence, I just stop reading her feed, and change the privacy settings on mine so she can only see my posts pertaining to cats and baseball. 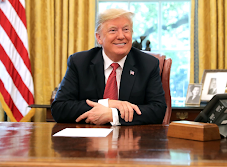 No, Auntie, I got the stubborn gene.

Donald Trump's mismanagement of covid cost us our lives. His ignorance and incivility cost us our standing in the world. He's diminished our faith in our free and fair elections. He conspired to destroy the sanctity of our Capitol. He's not taking another thing away from me.

He's not. I refuse to let him.

He's not worth it.