One of us has changed 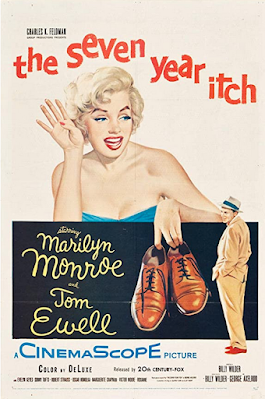 Yesterday afternoon I was waiting to hear from my new boss, Marilyn. I was a little nervous about it, a little unsettled, because she and I are just getting to know one another and I'm not sure we approach work the same way. Spinning the dial, I was happy to land upon The Seven Year Itch. A frothy comedy with (that other) Marilyn's most iconic scene: her dress blowing up as she stands on the subway grate. I went into it thinking it would be a lovely distraction from stress.

I'd seen the movie start-to-finish at least three times before. I'd always enjoyed it. Monroe was completely charming, and director Billy Wilder is one of my favorites (The Apartment, Sunset Boulevard, Some Like It Hot).

I was disappointed by how The Seven Year Itch made me feel in 2022. It struck me as dumb and smutty. ALL Tom Ewell's character thinks about it sex. He ONLY sees The Girl (Marilyn's character doesn't even have a name!) as objet de desir. He never stops trying to maneuver her into bed. (He doesn't ever just ask her, he's forever trying to trick her.) The movie no longer seemed silly or light. It was offensive.

One thing hasn't changed, though: Marilyn Monroe was luminous. Charming. Her appeal is immutable and immortal.