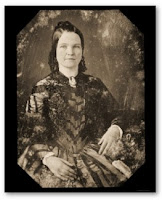 I'm nearly halfway through The Lincolns by Daniel Mark Epstein. He has just been nominated for President. I'm almost tempted to stop reading now because I'm enjoying this book so much, have grown so fond of this couple, that I hate what I know is about to happen to them: War, the loss of another child, the death of Mary's family members on the Confederate battlefield, and, inexorably, his murder. As if that's not bad enough, Mary's widowhood includes bankruptcy, madness and the death of a third son. So much loss is almost impossible to consider, but not confronting it won't stop it all from happening 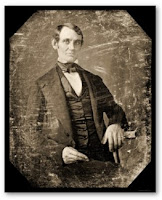 to these two. (I feel this way when I read about Princess Diana, like if I put the book away before she goes to Paris, I can somehow undo what happened next.)

I'm including these photos with this post, rather than the book cover, because they were Mary Lincoln's favorites, taken, she was fond of saying, "when we were young and so desperately in love."
Posted by The Gal Herself at 3/03/2011 02:56:00 PM 1 comment:

I get it now 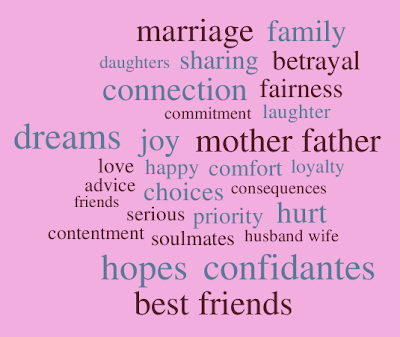 I happened to come upon an article about "emotional affairs," defined as when a man and a woman who are otherwise engaged become romantically involved without sex. This story was told from the wife's point of view. She talked about how her husband's non-sexual attentions to "the other woman" kept him from being with her completely, and how betrayed she felt when she thought of him confiding things about their marriage, and their life together, to this interloper.

The advice she was given? Insist that her husband sever ties with the other woman completely. No more phone calls, gifts or emails. Yes, it would be painful for her husband, but he must tell his platonic lover that his marriage is the most important thing in his life.

It got me thinking about my relationship with my best friend, and all the hiccoughs and fits and starts it's suffered over the past year or so. This has caused me a great deal of pain. This friendship means so much to me. I have come to depend on his counsel and look forward to sharing gossip and jokes and hopes and dreams. I find it comforting that many of the very qualities that others find most wearying about me, he seems to value … or even treasure.

I never thought about how our closeness must have felt to the one who was excluded -- his wife.

I have met her and reached out to her. She was not interested in my friendship. I thought it was because she was snobbish, or insecure, or messed up. I still feel that way. But I never considered how much pain accompanies snobbishness, insecurity and messiness.

I thought about all that I know about her -- the pain caused by her parents' divorce, the abortion when she was a senior in high school, the sense of betrayal she felt when she learned of how her father cheated on both the mother she loves and the stepmother she idolizes ... All of these things came up gradually, as he was sharing how hard he was trying to make his marriage to this complicated woman work. It never occurred to me how much she may resent how much I know about her.

When I confide my secrets to him, I always know in the back of my mind that he may share them with his wife. That doesn't stop me. I trust that, if he chose to tell his wife my secrets, he would do so with compassion and sensitivity.

The thing of it is, this was my choice. She didn't get a choice. He and I just began dissecting her over drinks one night and it's continued for years.

No wonder she hates me.

Then I thought of the conundrum my best friend has been presented with. What to do with me? I know he loves me, trusts me, enjoys me. It must be awful to consider severing our relationship -- especially since he's the one who cultivated it at first and he knows we have never been physically inappropriate and I have never done anything wrong. Not only would he miss me, he would have to deal with the guilt of causing me pain.

What a mess! How could anything that was born out of love and generosity cause so much pain to everyone involved?

So I get it now. The reason why we no longer talk on the phone every time he gets into the car -- whether he's off to choose an anniversary card for his wife or picking one of his daughters up from ballet -- is that he can't and shouldn't. His marriage is his primary relationship. He and his wife are both children of divorce and are committed to giving their girls a better childhood than either of them enjoyed. I appreciate, support and admire that. (A photo of him swing dancing with his youngest at the school Daddy-Daughter Valentine's Dance hammered this home.)

I also treasure that he still takes the time to be available to me every day, Monday through Friday, just as he did when we worked together all those years ago. He encourages me and comforts me. Now that I understand the tightrope he's walking, our friendship means even more to me.

I get it now. It would have been nice if he could have articulated all this to me himself. For a man so comfortable explaining his feelings about so many, many things, he's been very awkward about this. But who among us is perfect? The important this is: I get it now.

I told him that las 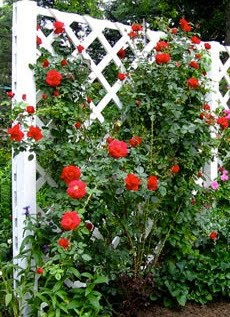 t week. I told him how the "a-ha" washed over me. Without going into the detail that would leave him feeling embarrassed and/or compromised, I told him I understood why we don't chat anymore and that it's OK -- "if you could, you would, but you can't, so you won't." And I reminded him of the quote from Let's Take the Walk Home that epitomizes our relationship: "We are the lattice that makes room for the rose."