Wow! He really is that good! 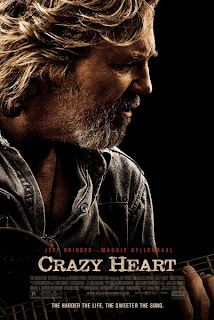 I've heard all the Oscar buzz about Jeff Bridges and thought it was, "yadda-yadda-yadda-deja-Mickey-Roarke." How could Bridges be as good as George Clooney in the almost-perfect Up in the Air?

Well, because acting isn't an athletic competition. And because Jeff Bridges is so completely believable in this that I not only bought him as an over-the-hill country singer, I swear I could smell how bad his whiskey-and-cigarette breath must be. And because this part was so different from all the other times I've enjoyed his work:
• the President in The Contender
• the Husband in The Mirror Has Two Faces
• the Accused in The Jagged Edge
• the The Bad Boy Brother in The Fabulous Baker Boys
• the Sweet Fiance in Kiss Me Goodbye and ... (drumroll, please)
• in one of my favorite love/sex scenes of all time in Against All Odds.

But back to Bad, his character in Crazy Heart. I can't tell you about his best moments without giving away a plot twist, but there's a sequence where my heart went out to him even as I wanted to slug him.

And Colin Farrell is surprisingly good, too.

Saturday 9: Everybody is a Star

1. Did you ever think that you'd be a star? If yes, doing what? Yes. I was going to be a great singer. I was hitsville when it came to lip-synching into my hairbrush.

2. Tell us about the last time you had a romantic dinner. It was at the Cityscape Bar. Terrific floor-to-ceiling windows gave us a lovely view of the city from the Chicago River. Really beautiful at night.

3. Tell us about your worst job interview. Got a call from the Chief Executive Creative Director from another agency. His office called, actually. He had heard tremendous things about me from a mutual acquaintance. He had to meet me to discuss a job. WOW! Really? But that agency did most of its advertising online and I'm more a print kinda girl. Are you sure it's ME he needs to meet? Oh, yes, I was told. My vanity got the best of me, so I went out there. Wearing a suit, on a day that was about 175º. The first thing Mr. Man said when he looked at my work is, "Where's all your online stuff?" Then I got a REJECTION letter from him. I'm still pissed, even after more than 5 years ago.

4. Tell us about your stupidest date. Our first date was terrific. Our second/last date sucked. He wore white jeans, which he could not bear to let get dirty. Even though he knew we were meeting at a bowling alley (which I assumed meant we were ... um ... bowling). Earlier that day he had cut his finger while washing his car. The wound wasn't deep, no stitches were required, just a bandaid like you have in your medicine chest. Anyway, between fiddling with bandaid and fussing over his jeans, I realized I was not his priority.

5. How much in common do you think you should have with a romantic partner? Oh, hell, I don't know.

6. Tell us about a favorite meme that you loved but no longer posts. Is the Thursday 13 still out there somewhere?

7. How did you get into blogging? I wanted to have an organized journal that I could update whenever I felt like it, wherever I was, so that it presented an accurate snapshot of who I am at this point in my life.

8. Do you share all your fantasies with a significant other? I have. I think it's sexy, as long as we limit it to people we'll never meet. It gets messy when it's "which of my friends would you love to sleep with?"

I live on the east coast (of anywhere).
I can spell definitely the correct way, thank you.
I have spellcheck enabled on my IE/firefox.
And right now it's telling me that spellcheck isn't a word.
I do a sport that isn't a team sport.
I'm right-brained.
I'm left-brained.
I'm split-brained.
I can read sheet music.
Horror movies are usually just funny.
I'm in serious kiss withdrawal.
A lot of people call me by my last name or my initials.
I have two middle names.
I enjoy sporks and other pointless things.
I am/want to be an organ donor.
I don't subscribe to any political party.
I'd like to/I do go to college in a city.
Whatever happened to green ketchup?
Drugs are lame. [medication is not, however]
^ You're lame.
^^Thanks.
Stephen King was right about Stephenie Meyer.
The universe tends to unfold as it should.
I can't stand cough drops with menthol in them.
I can name at least 35 U.S. presidents off the top of my head.
^And at least 40 state capitals.
I can hardly name any of either.
^But that's because I'm not from the states.
I find it hilarious that Miley Cyrus thinks she could win an Oscar for her movie.
Why the hell would Britney Spears (or anyone) make a song out of "If you seek amy"?
I get frustrated when someone cries during a movie when an animal dies, but then doesn't when a person does.
I wonder why the band "The Devil Wears Prada" named their band that.
Frankenstein is NOT the name of the monster.
I pronounce "route" like "root".
I say car-muhl, not car-a-mell.
I hate talking on the phone.
What the fuck is up with everyone wearing Uggs?
I've used a Wii Fit.
Angelina Jolie's lips distract me.
^But she was AMAZING in The Changeling.
I've never seen any of the High School Musical movies. And I don't care to.
Costco/BJ's/Sam's Club would be the perfect place to go in case of a zombie apocalypse.
I spell my name a way other than the most common.
Posted by The Gal Herself at 1/30/2010 01:24:00 AM 1 comment: