14. What do you notice when you're casually observing people? I take public transportation a lot, and I like to see how my fellow commuters while away the time. Talking to one another, talking on their phones, texting on their phones, reading books, occasionally dozing off ... no one (but me) reads the newspaper on the train anymore, and no one flips through magazines.

15. What would you say to Michael Jackson? First of all, this is a very odd question. But secondly, I'd ask him how he could have screwed Sir Paul over like that. Buying the Beatles catalog out from under his "friend" was a crappy thing for Michael Jackson to do.

Let's start with the good 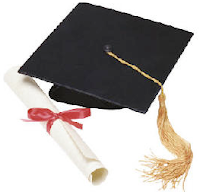 My sister and brother-in-law were hit very hard by the Recession. Plus, neither of them went on to college. He is a maintenance man, she is a lunch mom at the grammar school she once attended. Consequently they were not especially supportive. They didn't get in my niece's way, but they didn't help, either.

My late mother, while very proud of my niece's grades, didn't encourage her either. She didn't want her granddaughter to go away to school because she imagined the girl would get homesick. This amused me, because it was obvious my niece couldn't wait to get away and be independent. But it made me mad because it was my mother's fear talking. My mother was born, lived and died in the same suburb -- all white, predominantly Protestant, with a population that has hovered around 20,000 for my entire life. That village was her entire life, she was afraid of/incurious about the world outside of it, and didn't want her granddaughter to venturing too far away.

For my part, I pushed my niece toward Kendall. It's Chicago's top culinary college, it has a national reputation, and it would have exposed my niece to the city's premier restaurateurs. In my way, I was as wrong as my mother was. I wanted my niece to follow the path I took. I've always loved The Big City, and can't imagine living anywhere smaller than Boston or maybe Washington, DC. That's what I wanted for my niece. Of course, it's not what she wanted for herself.

She did the research, she got the grant money and the recommendations, she visited the campuses. It came down to Kendall and CIM at Baker College in Muskegon. Kendall was offering her the most money, but it was more expensive. She'd have to live at home. So she chose CIM at Baker. She needed space. She wanted to forge her own identity.

She did it! She got good grades, going to school year-round while juggling part-time jobs -- waitress in the winter, attendant at the miniature golf course in summer. She earned that diploma.

After the ceremony, we met her faculty adviser. He thanked her parents and me for helping shape "this wonderful young woman." To her credit, my sister said it before I could: "She did it on her own."

I had a terrible time during this trip, though. It represented one of the lonelier 24 hours of my life. Because I was with my family, and I don't especially like my family. More about that some other time. This realization makes me too sad, and up until now that has been such a happy post.