2) Barry sings that in the past year, "we've made mistakes." What in 2017 do you wish you could do over? Back in September, I saw a confidential document on the Xerox machine that detailed plans for my department in 2018. I've been worrying and fretting about what I saw ever since. I wish I had taken the damn thing and read it in its entirety. Then maybe I'd actually understand what's going on!

3) He also sings of happy nights with friends. Tell us about a really good time you had in the past year. Also in September, I went to Wrigley Field with my friend John. The game itself didn't matter -- my guys had already clinched a place in the play-offs and my favoritemost Cub (Anthony Rizzo!) didn't even play. But it was a great day. Sunshine, camaraderie, and margaritas in my favorite place in the world. (BTW, the Cubs play their first game on the road on March 29. I just have to hang on for 90 more days.) 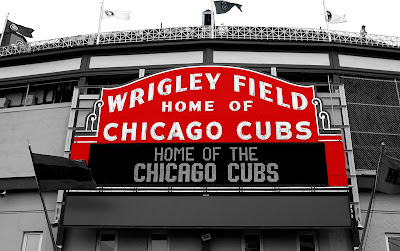 4) The song references growing wiser, as well as older. What's something you learned or discovered in 2017? I learned about Rosemary LaBianca. Up until I read Helter Skelter this year, I thought she was "just a housewife," just "another victim" of the ugly Manson "family." She was a gallant and accomplished woman. She went from single mother to millionaire entrepreneur in the early 1960s, before the women's movement made business more welcome for women. She was a loving mother and stepmother. She deserves to be remembered.

6)  What was the smartest thing you did all this past year? I did a very good job for my client this year. There are projects I can point to with pride.

7)  As this year comes to a close, what are you most grateful for? My health.

8) When this week's featured artist, Barry Manilow, was a jingle writer, he wrote the famous "You deserve a break today at McDonald's" song. When's the last time you visited the Golden Arches? It's been months. But every time I go, I completely savor the Big Mac. I really do love that burger every now and again.

9) Random question: In high school, were you more popular with the boys or the girls? I hated high school so much. That said, I did have girl friends that I hung around with on occasion.