To participate, and to see how others responded, click here.
1. What are you currently reading? A Hole in Juan, by Gillian Roberts. Since this is one in the Amanda Pepper mystery series, much of the action takes place in a Philadelphia college prep school. This time our heroine, English teacher Amanda, is trying to wrangle students excited about the Halloween season and, specifically, a "Mischief Night" dance. She senses something in the air, beyond just high school hijinks, and she's right. The science teacher, Juan Reyes, has become the target of sophisticated threats.

A cozy series like this only succeeds if you like the star sleuth, and Amanda is an easy to like Everywoman. She's funny but not snarky. She's smart but not brilliant. She cares about her students, but she's not sanctimonious. She loves her new husband (finally they're married!) and she's in tune with her cat, Macavity. I'm not that far into the book, but I'm comfortable and happy with the company already.

2. What did you recently finish reading? Chaos by Patricia Cornwell. I have to admit I didn't so much finish this book as abandon it. What a frustrating affair this was!
It's the latest in Cornwell's successful Scarpetta series. Dr. Kay Scarpetta is a character I like and admire. She's brilliant and discerning but also flawed. I love Kay Scarpetta's regard for her patients, the victims of crime, and her passion for justice. Cornwell is a wonderful writer. She not only created an admirable heroine, she can set the scene and make you feel the escalating tension/darkness/danger like few other authors can.

But this plot is a freaking mess. Too many characters, too many coincidences, too much unreasonable behavior, too many unbelievable plot twists. I won't say anymore for fear of being a spoiler, but I did actually get angry at Cornwell for squandering her gifts and the good will Kay has earned over the years.

3.  What will you read next? I don't know. Maybe a biography?

Bound by the accordion

My younger nephew has always idolized his cousin, my older nephew. As their observant aunt, this amuses me, as they could not be more different.

My older nephew is in the Navy, where he is enjoying success after being something of a fuck up. Bright but scattered, with more than a touch of ADD, he didn't do well in high school and failed at one attempt at college. He was living in his mom's house, subsisting at a minimum wage job as a clerk at a tuxedo shop, when he enlisted. Now he has a career, and since success can beget success, he has a solid relationship with a woman who appears to be very stable and nice, and a network of supportive friends (mostly military).

He's also noisy, suffers from poor impulse control, and loves making offensive jokes because he believes it's his duty in life to "stir the pot." He thinks Donald Trump is great.*

My younger nephew is a smart but achingly sensitive high school junior. He marches to his own drummer -- listening to the Beatles almost exclusively and devouring political non-fiction. Three books I've given him are Making of a President 1968,  Doris Kearns Goodwin's Team of Rivals, and Bernie Sanders' Our Revolution. I know the first two well enough to quiz him, so yes, he's read them. (While his friends read illustrated novels about The Avengers and The Justice League.)

Last summer, we happened upon a Black Lives Matter march in Grant Park and he truly wanted to join them.

The advent of Trump and the prevalence of social media has put a strain on their relationship. Not so the older one has noticed, though. He's not big on nuance. But the younger one has stopped following his cousin because he's been so turned off by the in-your-face racist/sexist/homophobic and anti-Bernie memes. "I want to still love him," the younger said. It broke my heart.

Last weekend, the two cousins saw one another for a couple hours. I saw the older one the next day (post below). He said he couldn't believe how "tall and quiet that kid is!"

That struck me as slightly ominous. My younger nephew is never quiet with me. Was he overwhelmed by his older cousin's boisterousness? Was he feeling awkward ... or disappointed? I'm not going to see the younger one for a month or so. But I assumed there might be a breach and I did what I could to heal it.

Both cousins enjoy Springfield, Illinois, and walking where Abe walked. So I told the older about my trip down there with the younger.

After paying our respects to Mr. Lincoln, we saw this ostentatious grave, which is within clear view of Lincoln's Tomb. 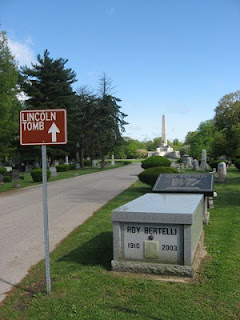 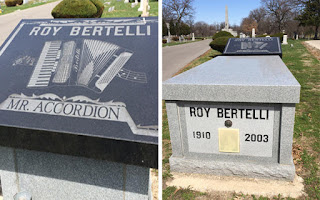 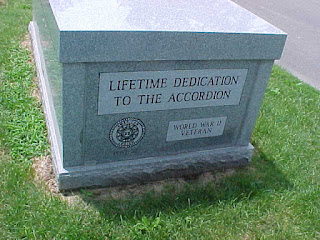 Next to Mr. Lincoln himself, Roy Bertelli (aka "Mr. Accordion") has the biggest resting place in the cemetery. And it's big, and it's stupid. One man saved the Union, one man loved the accordion. I mean, it's funny.

We all agree on that.

But my younger nephew didn't leave it at that. He researched Roy Bertelli. Then, when he was assigned a paper about "a courageous Illinoisan," he wrote about Bertelli's legal battle to obtain and maintain this monument to himself and his accordion. The paper ended, of course, when Roy died ... and had himself buried somewhere else. Yes, the goofy mess you see above is an empty crypt.

"Really," I told the older cousin, "he's like THE expert on Mr. Accordion. You should ask him about it."

"I will!" the older said between guffaws. "That's a great story. And he did a paper on it? That's awesome shit."

My work here is done.