I have been thinking about Caitlyn Jenner a lot because ... well, she's everywhere. The Kardashian media machine is firing on all cylinders. Also because, like all sports fans of my generation, Bruce Jenner meant something to me. He was courageous, he was dishy, he was the best. And now he's a she. That kinda thing captures a Gal's attention.

"I haven't walked in her shoes. I don't have all the answers to the mysteries of life," he said. "I can only imagine the torment that Bruce Jenner went through. I hope he's -- I hope she has found peace." 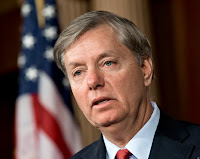 The above was said in IOWA by Presidential Candidate Sen. Lindsey Graham (R-SC). It would have been very easy for him, in that setting to embrace the hate being spewed by right wing talk show hosts. After all, that inflammatory rhetoric has made these cynical broadcasters very rich.

Instead he chose to be compassionate, sincere and -- dare I say it? -- patriotic. This is, after all, a nation founded on religious freedom. We don't have a national religion, and to hear a legislator speak with sensitivity but not judgement about Jenner's private, individual choice feels very American to me.

Foreign policy? Sen. Graham are on opposite sides. But Lindsey Graham just made my Monday morning and gave me hope for civility and decency in what Roosevelt called The Arena.