1) This song is about a girl who is heartbroken about a boy who won't take her calls. Do you screen your calls, deciding to let some go to voicemail? Or do you pick up whenever you possibly can? (We're referring to calls from people you know.) If you called on one of my landlines (work or home) and I recognize your number, I'll pick up. I never answer my cell, and I never check my cellphone voicemail. I do check my texts all the time, though.


2) When she was feeling her lowest, she heard a song on the radio that lifted her spirits. What's the last thing you heard on the radio? "Groovin'" by the Rascals.

3) This song includes the sound of squeaky wheels, indicating a sudden stop and perhaps a near-miss. Tell us about your most recent traffic mishap. I don't drive, and when I'm in a car, I tend to be in the backseat with my nose in a book or my eyes on my phone. So if I've been in a near-miss recently, I missed it.


4) "Last Night a DJ Saved My Life!" is featured in the 2002 video game, Grand Theft Auto: Vice City. Do you spend much time on video games? I spend too much time on Farmville.

5) This week's featured artist, Indeep, was a trio. We've had many groups, some duos and tons of solo artists on Saturday 9, but not many trios. Can you name another popular trio? Diana Ross and the Supremes

6) The last time Indeep performed together was in 1997, at a New Year's Eve show in Paris for French TV. Have you celebrated a holiday in another land? Nope

7) Britain's Royal Family is in the news this weekend, with attention centered on the nuptials. The Royals made news in 1982, as well. When this song was popular, Michael Fagan gained momentary fame by breaking into Buckingham Palace. He found The Royal Bedroom, where he came face-to-face with the Queen. He reports that Queen Elizabeth sleeps in a nightie that "reached down to her knees." What did you wear to bed last night? My Elvis nightshirt. England may have The Queen, but we claim The King.

8)  In 1982, you could buy a loaf of white bread for 50¢. Today, the national average price for that loaf of bread is more than $2.50. When you go grocery shopping, do you comparison shop and make purchases at more than one store? Or do you prefer one-stop shopping? I shop at different stores, but not for price, for the products. I enjoy shopping at Trader Joe's, but they don't carry some of the brands I like. I don't enjoy Whole Foods at all, but they carry some cleaning products I like. If I can't get it at Whole Foods or Trader Joe's, I'll probably pick it up at Target.

9) Random question: What's the first famous quote that comes to your mind? "A house divided against itself cannot stand." Mr. Lincoln

Diana's Boys arrive at the Church 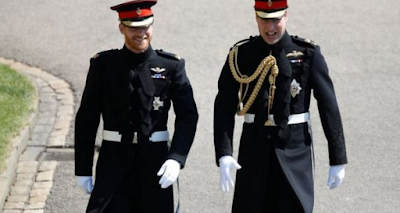 Meghan's mother looks so proud, too. And as I watched Charles chat with Meghan as he walked her up the aisle, he looked different to me. He was happy.