Saturday 9: I Wish It Would Rain (1968)
... because Janelle recommended the Temptations

1) This week's song focuses on rain. Ombrophobia -- the fear of rain -- is fairly common in children. How do you feel about rainy days? I take them as they come. They don't intrigue me but they don't bother me, either. Since I don't drive, rain does have an impact on when I do my grocery shopping. 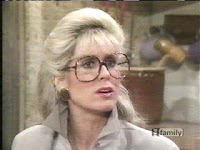 2) Lead singer David Ruffin always wore corrective lenses. Are you wearing glasses or contact lenses as you answer these questions? Yes. Nice, thick Coke bottle glasses. I only wear these around the house because they remind me of Judith Light in Who's the Boss.

3) Those thick-rimmed glasses were David's trademark. When he custom-ordered a luxury car, he had the image of those glasses painted on the door. Tell us something that makes your vehicle distinctive.  I share it with more than 391,000 other Chicagoans, since my car is on the CTA Green Line train.


4) David also had a penchant for mink. Rumor has it that he wore a mink-lined hat and even had that car upholstered in mink. If you could really splurge on anything right now, what would it be? Car? Travel? Clothes? Jewelry? (NO responsible answers allowed.) I'd take my nephew to Washington DC. He so wants to go and I'd love to share it with him.

5) He sings that he badly wants to go outside. What are your plans for today? Will you be outdoors very much? On Saturday I'm getting my hair cut and colored and then I'm off to meet up with my movie group. I'll be outside during the commutes to and fro.

6) The Temptations originally called themselves The Elgins because in 1960, Elgin watches were the high-end timepiece of choice. Today, in the age of cellphones and FitBits, wristwatches aren't that popular anymore. Do you often wear a watch? Yes. It's more for comfort these days, as I usually check the clock in the right hand corner of my computer screen when I want the time. The other day, I didn't even notice until afternoon that I had my watch on upside down.

7) This sad song was inspired by a real-life event. Motown songwriter Rodger Penzabene discovered his wife was cheating on him. Much to his own surprise, he didn't want to divorce or even separate from her; he just wanted her to love him and only him again. Tell us about a time when you didn't react as you thought you would. (Your story doesn't have to be as dramatic as Rodger's.) The Cubs winning the World Series was more important to me than I thought it would be. After all, I've been a loyal and loving fan of losing teams as well as winning ones for more than half a century. I knew that when the 2017 season opened, I'd be rooting for them, no matter how that final series with the Indians turned out. And yet it sure as shit did matter. It was glorious! It made me feel connected to relatives -- my grandparents, my dad, my uncle -- who weren't here to see it. It also helped bond me tighter to both of my nephews, who thought of me instantly when Rizz made that last out.

In the immortal words of Roy Hobbs:

9) Random question: When you catch a cold, do you soldier through it? Or are you a big baby? I used to tough it out, but now I stay home if I can. We all share the same space at work now, and if one person gets a cold, soon we all have it. It seems more considerate to isolate myself if I can.

On Day 25, I was happy for a few minutes with Napoleon. Back on Day 9, I introduced all of you to Grey and White Kitten. I look for him and the homeless person who adopted him every morning en route to work. I've given them some canned food and change and dollar bills and ... here's the thing. That cat is so calm, such a little purr box that I know the couple that care for him must be gentle and attentive. I support that. There's good in people who are good to critters.

Since Day 9, I've learned that the kitten's name is Napoleon. This morning he was curled up tight as a little fur shrimp, sleeping soundly even as traffic raced by and commuters and even dogs filed past him. He absent-mindedly purred as I stroked his head, though he didn't seem particularly interested in me. He was too sleepy.

His human told me that they pitched their tent last night near the Chicago River. He reports that it's a good thing Napoleon was tethered to a leash, because the frogs were out in force and Napoleon was out after them. That's why he was so tired this morning. And it occurred to me that, while being homeless and sleeping in a tent by the river is not necessarily desirable for humans, it's undoubtedly heaven for Napoleon.

I worry about them when it gets cold. There are shelters that allow pets, but I doubt the dogs and cats Napoleon will come in contact with have been immunized. Still, he's certainly loved and comfortable, and that makes me happy.

If you want to play along, just come back here (meaning to this blog, not this individual post) each day in August, looking for the Happy Cub. Every day I will try to have a post with the headline: August Happiness Challenge: Day [X]. Leave a comment and then post your own daily happiness, with AuSaturgust Happiness Challenge in the title to make it easy to find.
Posted by The Gal Herself at 8/25/2017 06:20:00 PM 1 comment:

On Day 24, I'm happy for support. I've been so stressed about internal politics. As I've worked on this latest project, my efforts haven't been about what's right for the client -- whom I admire -- and moving their business forward. It's been about whether or not I can get past our 27-year-old account exec, who is harder to get past than Cerberus, and just about as pleasant.

My skin's a mess. I blame her.

I showed my efforts to my boss, who focused where I needed him to focus and made valuable contributions. I ran everything by an exceptional designer here on staff, who also pitched in.

Even better, both my boss and the other designer volunteered to be present when I finally show account exec everything. I feel so much better knowing they're with me on this. They have faith in my efforts, they appreciate how hard I've worked, and they have my back.

Now maybe my skin will start to heal.

If you want to play along, just come back here (meaning to this blog, not this individual post) each day in August, looking for the Happy Cub. Every day I will try to have a post with the headline: August Happiness Challenge: Day [X]. Leave a comment and then post your own daily happiness, with AuSaturgust Happiness Challenge in the title to make it easy to find.
Posted by The Gal Herself at 8/25/2017 06:04:00 PM 1 comment: