16. Do you want any piercings? I have one in each ear, and that's enough for me.

17. What’s your mousepad look like? I don't use a mousepad.

18. Have you ever been to a psychic/tarot reader? Yes. It can be fun. I don't believe in it, but I understand and respect people who do.

19. How do you identify spiritually (do you follow a religion, what do you think about soul/spirit, etc.)? I am a Christian. I believe we each have a responsibility to our neighbors, to our country and to our planet. I try to live my life that way. I am 100% sure there's a place for me in Heaven.

20. Do you prefer your nails long or short? Naturally, after contemplating my immortal soul, my mind wanders to my nails. I prefer them short.

21. What are your favorite smells? Cinnamon, lavender

22. Do you still use a radio or just use your phone/computer for music? I love my shower radio sooooo much! It's a great way to start my morning.

23. What kind of socks do you prefer to wear? Plain white anklets.

24. Do you have any family heirlooms? Nothing that is of value to anyone but me. 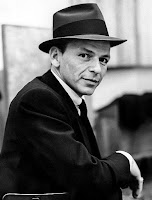 25. Are there any musicians you didn't like at first but grew on you? Sinatra. I used to think of him as an irrelevant throwback, like a rotary dial phone. But once you truly fall in love (and get your heart broken), you realize what a terrific singing actor he was. As he sang, you believe he knew what you felt because he felt it, too. Also, the more I hear other singers of his time (from Dick Haymes to Dean Martin to Tony Bennett), I can hear how much better he was than his peers. He had soul.

26. Is there anything you used to love but now dislike? Since covid, my sense of smell is changed. I can no longer abide citrus. (Anyone who dismisses covid as "just the flu" is an ass; get vaccinated and boosted! Not just for your own sake, but to protect everyone you come in contact with.)

27. Your favorite place to be aside from your home? Right now, anywhere my oldest friend is. I miss her very much these days and worry about her. I wish we weren't a continent apart!

28. What is your favorite kind of tea? This year I've been drinking tons of Bigelow salted caramel tea.

29. Any old home remedies you use when you're sick? My mom was a big believer in room temperature 7UP for just about everything.

30. What level of brightness do you usually keep your phone at? As bright as possible.

Look who's a proud auntie!

Last month my nephew sent me a cryptic text, teasing "exciting" news about his future, adding that he had to see my face when he shared it.

Naturally I've been going crazy with curiosity! He's graduating in May. Are we talking about a new, steady girl? A job? Does he want to go on to get a teaching certificate? As much as he's enjoyed four years of studying public policy and political science, he isn't 100% sure he wants to make it his career. He's nervous about the relocation that would likely require.

Well, here's an unexpected plot twist. He has a job already lined up after graduation. As a writer! More than that, he's going to be a baseball writer!

Around Halloween, he was checking one of his favorite baseball sites and saw a job posting. Even though he didn't have the qualifications specified -- journalism degree, portfolio, experience -- he filled out the application and sent them a sample article about where he predicted where former Cub Kris Bryant would land for the 2022 season.

They liked it! Enough to give him an exercise, just to see if he could write about other teams as well. They liked that article, too, and gave him an interview. He wowed them with his deep knowledge of stats and passion for the game.

He's an intern now. One of his stories -- the original one about Kris Bryant -- was reworked and posted and they paid him for it. With the baseball strike, there is nothing going on right now and likely won't be until spring training. So the site is very comfortable letting him juggle his writing duties and his schoolwork just now.

After graduation, he becomes a full-time baseball writer with a byline! And a regular salary based on a 40-hour workweek.

He won't be a reporter. His job will include scouring social media, major news sites and individual sportswriters' columns for news and then putting his own spin on the aggregate. No reason why he can't do that from his bedroom in his parents' house.* This gives him a chance to earn money at his own pace until he moves out.

I admit it, I got weepy at the news. "I wanted to tell you face-to-face, because you're the one who introduced me to baseball," he said. A next generation baseball fan, a next generation writer. I am so proud and so very moved by this.

While the website he's working for is reputable and has been around for more than a decade, I know he's never going to get rich working there. I'm also not sure about how quick the turnover is at this site. But it will definitely open doors for him, if sportswriting turns out to be his chosen career.

If it doesn't? In May he receives a diploma that he can still use to get a job in politics and policy. Or PR, and here his web writing experience will be a real plus.

*His mother will love that.