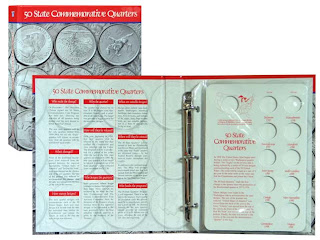 That's what my nephew said when I presented him with a folder of all 50 commemorative quarters. They were a gift for him from my friend Edgardo, the one I visit in Key West. He put a lot of time into the collection, and wanted to share them with someone who would appreciate it. He certainly made a good choice with my nephew.

This afternoon my nephew composed a "thank you" note to Edgardo. At the bottom he included a drawing of himself, on the sofa, being thrilled at the moment he received his gift.

Instructions: Answer the Current Obession category and then explain WHY you chose that response.

Book: U is for Undertow by Sue Grafton. I'm a big fan of this mystery series, and if it wasn't for my "no more books" resolution for 2010, I'd have it now.

Snack: Baked Lay's Potato Chips. Fortunately I don't have any in the house. If I did, I'd inhale them. I think it's the salt.

Restaurant: My favorite local coffee shop. Because it's been "closed for remodeling" since Halloween, yet every time I peer in through the picture windows, everything seems exactly the same. (Except for the dead philodendron.)

Beverage: Hot chocolate. I haven't had any yet this winter, and right now it would really hit the spot.

Decor: I hate my bathroom and keep thinking of ways to redecorate it, if I had the money.

Actor: Robert Downey, Jr. I love his voice. Reminds me of an old boyfriend.

Actress: Carey Mulligan. She starred in An Education, a 2009 movie I enjoyed, and she has created a lot of Oscar buzz.

Movie: Valley of the Dolls. A movie that's so bad it's good. I have the DVD and feel like watching it again.

TV show: Before Dallas or Dynasty, there was Peyton Place. It's been fun to watch it again on DVD, snd the early 1960 primetime soap is alternatingly funny and involving.

Hobby: Following the adventures of the Chicago Cubs. They are my team, my guys, and I miss them desperately during the winter.

Band: The Beatles. I have loved them ever since their first appearance on The Ed Sullivan Show in 1964.

Song: "My Tears Dry on Their Own" by Amy Winehouse. I'm new to Amy. I had dismissed her as a vulgar strung-out tabloid target. She may be that, but she's much more, too. The heroine of this song is honest and unsparing in her self appraisal,"I should be my own best friend, not fuck myself in the head with stupid men ..."

Meme: Well, I guess it's this one. Completing it seems to have become my life's work.

Blog: My own. It began as a journal. While it's evolved into more than that, and I appreciate the support my online buds have shown me when I have needed it, it still gives me very valuable insights who I was and how I felt at specific moments in time.

Friend: All my friends are my obsession. They are very important to me. Lately I find myself thinking most about Kathleen because she misses her son so much -- he's a freshman at college and while he's thriving in New York, his mom is having a hard time adjusting.

Quote: "The time to repair the roof is when the sun is shining," JFK.

Peeve: My own lack of self discipline. It stops me from repairing the roof when the sun is shining.

Sport: Again, my Chicago Cubs. I really don't have the capacity to be obsessed with any other team.

Singer: My ongoing obsession is Sir Paul, of course. But this weekend I have been listening to Elvis a great deal because Friday would have been his 75th birthday.
Posted by The Gal Herself at 1/10/2010 12:33:00 AM 8 comments: