"Such a fine and natural sight"

Hearing this song made me happy today. 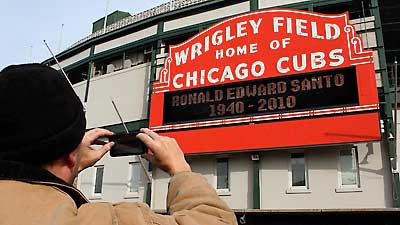 Ron Santo played third base on the Cub team -- the 1969 team, the great one, the one that also included Ernie Banks, Billy Williams, Fergie Jenkins. He was one of the heroes of my girlhood and brought me countless hours of joy as an adult as he broadcast Cub games from the WGN radio booth.

He died before dawn this morning and I feel like I have lost a bud. He battled diabetes and lost both legs in the fight, he endured first heart trouble and then bladder cancer, but he was always enthusiastic and delightful on air.

"This Old Cub" is how he's been known. An icon from his playing days and the voice of the ever- hopeful who flock to the park at Clark and Addison. Fans have been collecting at his beloved Wrigley Field to leave caps and gloves in memorial, and to photograph the sign out front.