1) Elvis checked in to the hotel at the end of Lonely Street. Where was the last hotel or motel you stayed at? Southwinds Motel in Key West. Here I am on Christmas morning.

2) He sings that Heartbreak Hotel is always crowded. The fear of crowds is so prevalent that it has four names (enochlophobia, ochlophobia, demophobia and agoraphobia). Are you comfortable in a crowd? Not really. Walking up Duval Street in Key West, my friend (who lives there) was all, "I've got to get out of here. Let's go up a side street." The "crush" of people was making him crazy. I didn't even notice.

3) The desk clerk at Heartbreak Hotel is dressed black. Do you often wear all black? Not as much as I used to. As I get older, I no longer think the stark contrast between black and my very pale skin is flattering.

4) The song was written by Mae Boren Axton, who said it was inspired by the story of an anonymous young man's suicide in a hotel. She said she read in The Miami Herald that the John Doe left behind a note that said, "I walk a lonely street." What's the last note you handwrote? (Hopefully it was more upbeat.) It was a "farewell" card to a freelancer who shared our office for two months. I signed it from "Me and the Audreys." The Audreys are my massive philodendrons -- named for the plant in Little Shop of Horrors.

5) When Elvis was 11, his parents bought him a guitar. He had asked for a rifle, but his mama convinced him a guitar was a better idea. Tell us about a time one of your parents was right about something. My mother drilled good manners into me. While I have been teased for saying, "excuse me" to file cabinets and chairs, it has, generally, held me in good stead.

6) Not long before "Heartbreak Hotel" was recorded, Elvis' father recommended he give up the guitar and become a truck driver. Tell us about a time one of your parents was wrong about something. Decades ago, when I was not yet 30, I was toying with buying a condo. My neighborhood had taken a turn for the worse and there were units in a new building, just sitting there unsold. My parents vehemently lobbied against it. It was too much money, too much responsibility for me, all alone. If I'd gone ahead and done it, I'd be living in this same neighborhood, but I'd no longer have a mortgage. Thud! Thud! (That's the sound of me, kicking myself.)

7) There are many stories about Elvis' manager, Col. Tom Parker. One anecdote, about his career before Elvis, has the Colonel painting sparrows yellow so he could sell them as canaries. Have you ever been ripped off? Yeah. Last Christmastime I bought some toys for the Toys for Tots drive. It was Buy 2, Get 50% Off the Third. I realized as I left the store I didn't get the 50% off. But the guy who runs the place -- a mom and pop store, literally -- was sooooo nice, and ironically, so proud of mastering the store's new cash register, that I didn't have the heart to go back. If this gentleman is a scam artist, he's very good and deserves an Oscar.

8) Speaking of birds, Elvis once owned a peacock. It damaged his cars, so he gave it to the Memphis Zoo. In earlier days, it might have been dinner, for peacock was considered a medieval delicacy. What's the last poultry you prepared? Prepared? Dear God, I don't recall. But yesterday, at lunch, I had chicken strips and barbecue sauce at my favorite little dive restaurant.

9)  Random question: You and a friend have dinner at a restaurant. Your friend left her wallet at home, so you pick up the entire tab of $62, including tip. A few weeks later, you two meet for lunch and when the bill comes, she puts down half. Do you remind her that she still owes you $31 from the last time you dined together? Hell to the yes! $5 I'll overlook. $30? No. I don't know anyone who can afford to just forgive $30. (Which reminds me, my oldest friend has owed me $100 for two months now. She mentions it every now and then, so I know she remembers. But you know, I could use that money. My end of month check just doesn't stretch that far. I just wish her life wasn't so full of drama. That's what keeps me from outright asking her for it. But if we were having lunch together? I'd say, "This one is on you because of the $100 you owe me.")

That hits the spot! 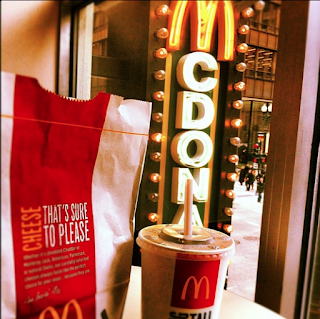 Every once in a while, I have a distinct craving for a Big Mac. Not a burger, a Big Mac. Not a Quarter Pounder with Cheese, a Big Mac. And so this week I headed over to my favorite McDonald's, the one on Randolph in Chicago's Theater District.

The menu is the same as any and every McDonald's, which suited me fine because I wanted a Big Mac. But it's the sign out front I love. Neon! And it has an upstairs, where no one ever goes. At lunchtime, everyone takes their bag to go. So I got a table by the window, finished my Big Mac and my book, and watched the city go by.