1) In this song Jimmy sings of "booze in the blender." What do you prepare in your blender? I don't have a blender.

2) As the song opens, Jimmy is sitting on his front porch swing. Describe the front porch of the building you're in right now. We don't really a front porch. There are four or five steps (odd that I never paid attention to how many) that lead to the vestibule where our mailboxes and doorbells are.

3) Jimmy sings of being able to smell boiling shrimp. Do you prefer your shrimp boiled, glazed or breaded? All shrimp is good shrimp to this gal.

4) During the song, he mentions his flip flops. Have you put your flip flops and sandals away till spring? Or is it still warm enough to wear them? It'll be warm enough again this weekend. But I know these days are waning.

5) Jimmy Buffett had hoped this song would be recorded by Elvis Presley, but The King died before he could perform it. What's the first Elvis song that comes to mind? "Like the river flows surely to the sea, darling so it goes, some things are meant to be." I'm such a sucker for Elvis and this song.

6) Buffett fans are known as Parrotheads. Concert attire for a well-dressed Parrothead often includes a Hawaiian shirt and a foam fin hat. What will you be wearing tonight? Same as I will be wearing all day today -- jeans and a t-shirt. I went out this week and can't afford to this weekend. Plus, my foam fin is at the cleaner's.

7) Loyal Parrotheads paid between $500 and $5000 to see Mr. Buffet at a fundraiser for Barack Obama's 2012 Presidential campaign. What's the most you would pay for a concert ticket? I've seen Jimmy in concert and thoroughly enjoyed it, but not $500 worth. I did, however, pay $285 to see Sir Paul, live and up close from the infield at Wrigley Field. My favorite Beatle at my favorite place in the world. It was glorious.


8) Jimmy is an outspoken environmentalist and supports causes like ocean conservation, saving the manatees and expanding the Dallas Zoo. What steps do you take to help save the planet? I recycle. I'm careful to choose appliances with good Energy Star rankings. I bring my own canvas bag to the grocery store. Fill my reusable water bottle from the tap. I know I should do more. We all probably could do more.

9) Uh-oh. When Jimmy and the Coral Reefers played in Wisconsin this past August, more than two dozen concertgoers got tickets for possession of marijuana and drug paraphernalia. Do you believe pot should be legalized? I'm really ambivalent on this. On the one hand, the police and courts are wasting so much time and money on this when there are bigger problems. On the other hand, I don't think it enriches anyone's life. Oh, and I hate the smell, I really do. Does that make me sound like an old fart? Well, Jimmy himself is getting up there, isn't he? He must be nearly 70 by now.

Checking on my chicks 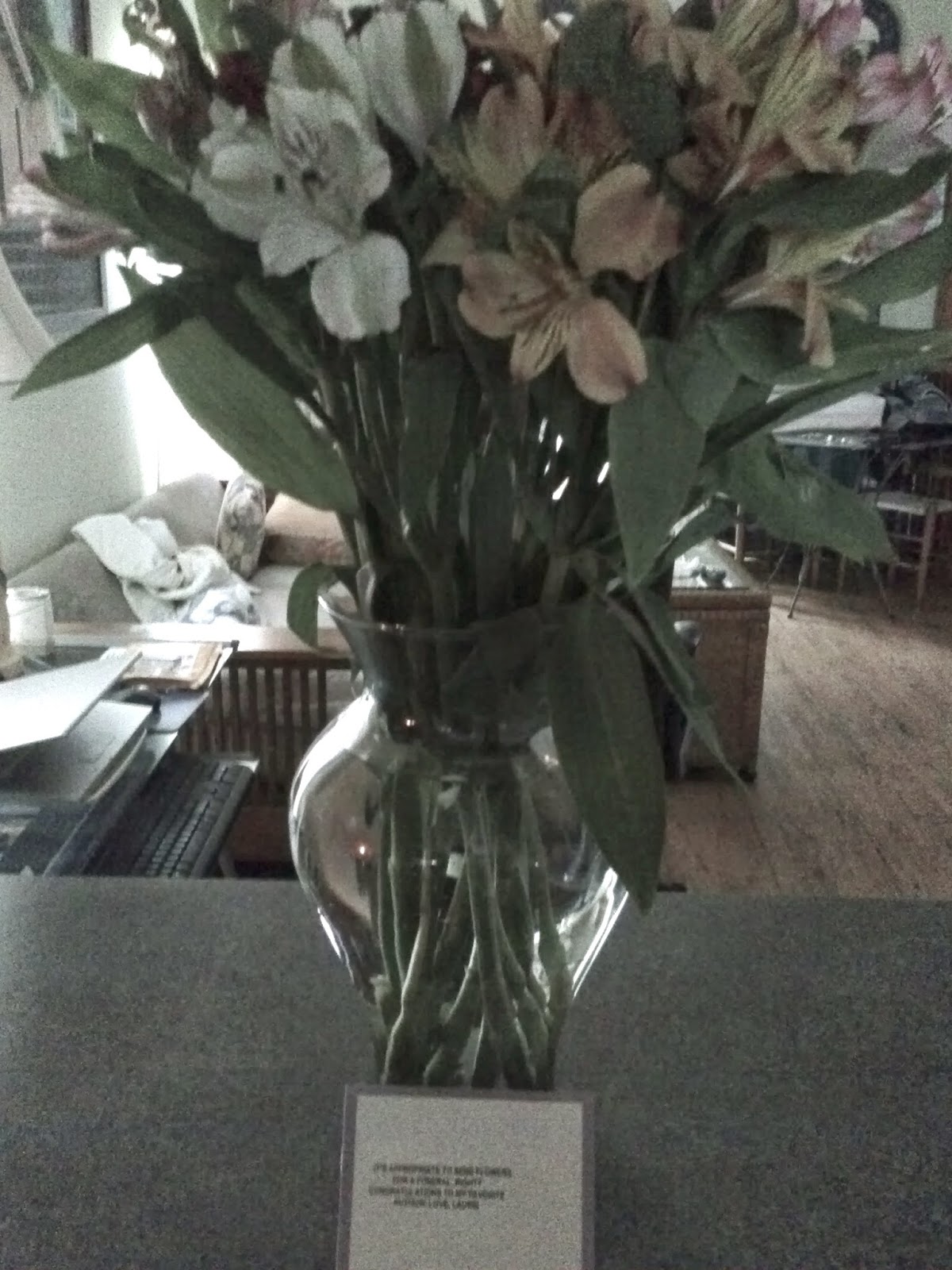 Sometimes I can be a mother hen when it comes to my friends. So I'm happy to report that some of my chicks have checked in and are doing OK.

My friend in the Keys is so excited about his book going to press. I haven't spoken to him, but we've emailed and texted. Since he's been working on this novel forever -- writing, rewriting and revising for, literally, years -- it represents such a big chunk of his life. I sent him these flowers to commemorate the occasion and he snapped this with his phone. Yeah, I know I'm supposed to be economizing, but 800Flowers had certain bouquets on sale AND I got bonus airline miles. Plus, c'mon, this is an event and attention must be paid.

Tom's wife is pregnant and he's happy at his job. Tom is a great guy. A "bro," as he and his friends like to say. He's had a tough go of it professionally over the last two years but he's kept at it and his hard work has paid off. His personal life is going very, very well, too. His wife's pregnancy happened faster than he expected but just as she hoped. She's a pediatric nurse at a major city hospital, and consequently sees only the sickest babies born to women over 35. The millions of healthy ones born to 35+ mommies each year? Those are not entrusted to her. So she was most eager to have her baby before she turns 35 and this one will come in under the wire. Tom is happy, but since it's nearly six months in the future, it doesn't seem "real" to him yet. What he is over the moon about is his dog. They got a puppy at Christmastime, his first pet ever (!), and it's such a delight to hear him talk about how that dog has opened his heart. Naturally, since we were in a sports bar and the visages of Rice and Petersen were on the screens all around us, the subject of the NFL scandals came up. Tom is a massive football fan who likes to watch Dolphins games in his official jersey, but this year he can't bring himself to watch. He talked about an incident where he accidentally made his puppy yelp and it literally made him cry. He says with that in mind, he can't look at men who would beat those who love and trust them. I thought I was going to cry.

Mindy's got it all in perspective. Her career and marriage are solid. Her oldest son just got his own apartment in the city. While he's a little lost professionally, he does have a well paying job (unusual for millennials in this tough economy!) and he's happy with his girlfriend and, since he's not yet 24, he has time to find a job that satisfies both his wallet and his imagination. Her younger son is now her problem. A senior in high school, he's skipping school and getting very bad grades already again this year. He has ADD and isn't willing to do the extra work required of him. Mindy and her husband are very patient with their son, more patient than he is with himself. Mom and Dad accept that he's going to have to go to community college for a year or two, to mature and get his grades up, and then go off to college. They're ready for his higher education to either be a 6 year slog or perhaps it will be a vocational school for him. Their son, however, has a new circle of friends who are already talking about going away to Iowa State, Oberlin and Purdue, and he won't have the grades or scores to get in to a good school. So he's been acting out -- skipping school and saying things he KNOWS will press his mother's buttons. Specifically that he thinks Adrien Petersen should be left alone ("So he hit his kid. Big deal.") and, since their beloved cockapoo has developed diabetes, it's time to put the dog down ("She's so expensive" and "Her best her days are behind her" and "It's embarrassing the way she pees all the time."). It hurts her that her sweet-natured little boy has turned into such an asshole, but then she reminds herself that he's mad at the bad choices he's made, mad because he's not going to have what he wants when he wants it (the dorm life he saw his brother enjoying at U of I and that he his friends will have this time next year) and this is how the mad manifests itself.

Cha-ching! Tom picked up the check for my burger and beer. I overpaid for my portion of the meal with Mindy* because I didn't have any singles and we didn't have time to wait for change if we were to get from the restaurant to our trains. So I'd say financially it was a wash.

Best of all, that's three chicks this mother hen can check off her worry list.