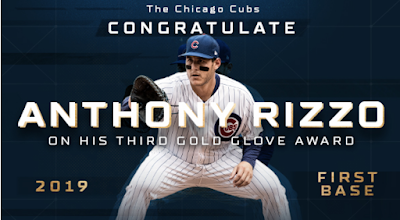 Sunday was a big day for my favorite Cub. First, he was named the National League's best first baseman. And the Cubs settled his contract, giving him a bump in salary to $16.5 million.

Now that might sound like a big payday to you and me, but in context, he's a bargain. In 2020, Bryce Harper will make $20 million with the Phillies. The Cubs are paying both Jason Heyward ($21 mil) and Jon Lester ($20 mil) more than Rizzo.

But I'm not sure Rizzo cares. In May, when asked by a reporter about his contract, he said into the microphone, "I am set for life. I have a lot of money." And, from the same interview,"I love this city and everything we have done here. The fans, the people, the hospitality we get in Chicago -- I feel like Chicago is home for me ... I can never visualize playing for another team."

Can't you just imagine his agent choking when he heard that? "I don't need money," and "I don't want to play anywhere but here," are not the posture one should take going into negotiations.