Gone Too Soon Blogathon -- In Celebration of the King 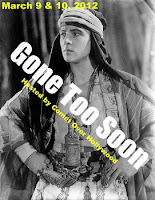 NEWBIE NOTICE: This is the first time I have ever participated in a movie-lovers' blogathon like the one introduced by Comet over Hollywood, and I hope I'm doing it right!

The theme is “Gone Too Soon” --
spotlighting stars
who died before the age of 50.

When Elvis Presley died in the summer of 1977, he was just 42 and, unfortunately, his movie career was long over. His last performance as an actor was in the ridiculous Change of Habit (1969), which featured him as a ghetto doctor so compelling that hip nun Mary Tyler Moore has a hard time choosing between The King and The Lord.

What's that? You haven't seen Change of Habit? Oh, you must! When, to borrow from Miss Holly Golightly, you're getting fat or it's been raining too long or you're just sad, nothing hits the spot like a big glass of milk, a box of Nilla Vanilla Wafers and a campy Elvis movie. While most of the 32 films Elvis made are really goofy trifles, those are not the ones I want to concentrate on today.

Instead there are a handful of Elvis movies that show flashes of brilliance. You can see a naturally gifted actor on display, and it makes the fact that his talent was mostly wasted on drek, and that we lost him before he could rehabilitate his legacy as an actor, all the sadder.

It's poignant to recall that Elvis wanted to be an actor, not a movie star. He longed to someday share the screen with his own idol, Tony Curtis, and really wanted the Earl Holliman role supporting the Great Kate Hepburn and Burt Lancaster in The Rainmaker. Instead, Col. Tom Parker and Hal Wallis steered him into quick-to-produce musicals, putting him in lead roles before he was ready, because they wanted the fast soundtrack dollars. When you see how well he handles himself in these three movies, made back-to-back-back in rapid succession before he went into the Army, you long for what might have been. 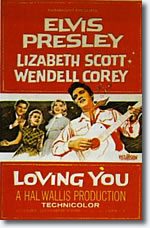 In his second movie, Loving You (1957), Elvis played Deke Rivers, a country boy very much like ... well, Elvis Presley. He's a truck driver one day and a rock star the next when he's discovered by sleazy, big-city publicist Glenda Merkle (the always entertaining Lizbeth Scott) and her C&W star client, Tex (Wendall Corey). Deke is at heart an innocent and he confuses Glenda's seduction -- motivated by lust and an interest in controlling her hot new property -- with love and almost loses his "good girl" small-town girlfriend, played by (Sister) Dolores Hart.

Watch for the great scene toward the end where the disillusioned Deke confronts Glenda. It's played with great conviction, perhaps because it reflects how young Elvis was beginning to feel about Wallis and Parker and everyone else in his real life who treated him like one big hunka meat they could each take a bite out of. "It's not my future you care about, it's yours! It's what I can do for you. You don't care about me!"

Next up is Jailhouse Rock (1957).Yes, of course you have seen the iconic title number. But in my favorite moment, he is absolutely silent. Elvis/Vince is hanging around in a bar. There's a stripper on stage. All we see are her legs. Watch where Vince focuses his eyes. It's funny and lascivious and establishes Vince as every boy our parents ever warned us about.

He handles many of his lines in the same light, bad-boy manner, and it's easy to imagine him growing into the kind of roles Burt Reynolds became known for. For example, when a girl resists his advances, saying, "How DARE you think such cheap tactics would work with me?" our hero responds, "Them ain't tactics, Honey. That's just the beast in me." Said with a sneer and with his tongue in his cheek. (Think that's easy to do? Try it yourself at home!) 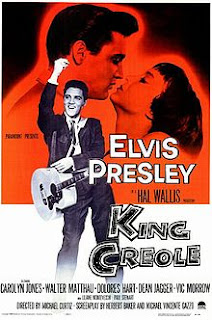 The last in this trilogy is King Creole (1958). Directed by Michael Curtiz (yes, that Michael Curtiz!), this movie has a very strong cast, including Carolyn Jones, Vic Morrow and a very nasty Walter Matthau. Elvis said Danny was his best role, and I think he's right.

The plot is a 50's vintage, poor man's Bronx Tale: Slum kid torn between two kinds of men (his poor but honest father and the more successful but slimy mobsters who run the town) as well as those two age-old types of women (Sister Dolores again and the gangster's #1 moll).

After Danny is expelled from school (and the movie deserves points for acknowledging he must be the oldest high school senior in school history) for fighting and just general surliness, his father tells him that a real man doesn't try to solve every problem with "a punch in the mouth." Danny responds with real frustration and contempt: "I stopped listening to you when I ran out of other cheeks! I remember when I was no more than 3 feet high you took me to the circus. You accidentally bumped into some guy and he turned around and punched you. He punched you right in the mouth, and you know what you did? Nothing! Nothing! When they swing at you, Pop, it's not enough to duck, you gotta swing back! Maybe you can't anymore, but I'm not taking after you. You go to school, I'm going out and make a buck."

So yes, it's OK to laugh at crap like Viva Las Vegas and Clambake, but it would be tragic to forget that, at one point, Elvis wanted to make films he could be proud of. I mourn the actor he longed to be and I believe he could have been.

Oh, who knew his touch would be so knowing, his skin so cool and his lips so sweet? This was better than Disneyland! She couldn’t wait to see what other thrills awaited her.