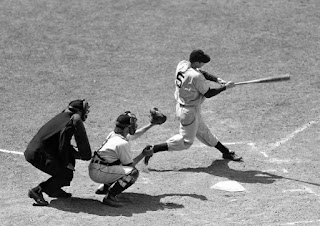 I've long been a little in love with Joe DiMaggio. Like Baryshnikov, he was grace in motion. Look at that swing! I remember seeing a documentary about Joltin' Joe that showed him at a charity event, raising money by bowling with a massive round of gouda. He made even that look classy.

Joltin' Joe is on the news again this summer, as baseball fans observe the 75th anniversary of his streak. He hit in every damn game for nearly two months, 56 games in all. It's considered baseball's unbreakable record.

In 1998, Sammy Sosa and Mark McGwire chased one another in an exciting home run derby. I thought we Cub fans, along with the rest of the country, were crazy into it. The attention Sosa and McGwire got with nothing compared to the white hot light on Joe 75 years ago. A lot of it had to do with New York then, as now, being the world's media center. I think more of it had to with Joe. He was a real hero, as opposed to those two juicers.


After his career was over, he became famous as the man who really loved Her. The Marilyn Monroe legend is filled with tales of Dimaggio's devotion, even after she left him. One of the most enduring and harrowing has to do with Marilyn's four days at Payne-Whitney. Monroe believed her psychiatrist was admitting her to a rest home. Instead, she found herself on a cot in a psych ward. It's possible that, in long-ago 1961, a psych ward was the best option available to this very troubled woman. But that doesn't mean it was handled correctly. Marilyn was terrified, her anxiety escalated and burst through the roof. Her doctor was unavailable. Her close friend and mentor, Lee Strasburg, tried to help but was unsuccessful. She got word to Joe, who was still one of the most powerful men in New York.

By that time, they were divorced. She also remarried and divorced Arthur Miller and had high-profile affairs with Yves Montand and Frank Sinatra. And yet, Joe was there for her. He warned hospital staff that he was coming to get "his wife" at the end of the day and she'd better be ready to come "home" when he arrived. If she wasn't, he threatened to take the hospital apart "brick by brick."

They released her to Joe's care. Just as the coroner would release Marilyn's body to Joe. And every week for more than twenty years, he made sure the Parisian Florist on Sunset Blvd. delivered roses to her grave. According to his friend, Morris Engelberg, who was with him when he died, Dimaggio's last words were, "It's OK. I'll finally get to see Marilyn." 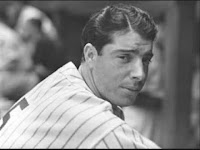 Oh, I've heard all the negatives. I know of his reputation for being cheap. He and his only child were estranged at the time of his death. He could be prickly: if he wasn't introduced as "The World's Greatest Living Yankee," he wouldn't appear (which looks to me like a petty swipe at Mickey Mantle).

But you know what? I don't care. I love Joe Dimaggio. And so, to paraphrase Simon and Garfunkle sang, I'm turning my attention to him this morning.

1. What are your current obsessions? I've discovered vintage, black and white gameshows from the 1950s and early 1960s and I'm transfixed. They reveal America on the cusp of a seismic shift that no one saw coming. On the one hand, I love how courtly everyone was, how elegant in jackets and ties and white gloves and jewelry. On the other hand, the racial and gender lines were drawn with a heavy marker. Women referred to themselves as "Mrs. John Smith" instead of "Mary Smith." Hispanics and Asians were invisible, and blacks were domestics or in the military. I feel like warning them that the times, they will soon be a-changing. (They haven't heard of Bob Dylan yet.)

2. What are you listening to? A documentary about DB Cooper.

3. Which item from your wardrobe do you wear most often? Jeans.

4. What are you reading? Wanton's Web. It's a murder mystery set in Chicagoland and I love how careful the author is about the time/place.

5. What’s for dinner? I don't know for sure, but there is a pork chop thawing in the refrigerator.

6. What was the last thing you bought? Dinner to celebrate my friend John's birthday. We had a very nice time.

7. Guilty pleasure? Vodka. (I had too much to drink at dinner and I'm rethinking my choice.)

8. What training did you get and how do you make a living? 13 years of public schooling. And I'm an advertising writer.

9. If you could go back in time, knowing what you know now, and choose a different career path, what would you train to do? I'd like to work with animals in some capacity. Maybe I'd train to be vet tech.

10. What’s your best time of day? Late morning or late, late at night.

11. Do you like being on a team or are you a solo player? I'm comfortable in both role, but I prefer playing solo. 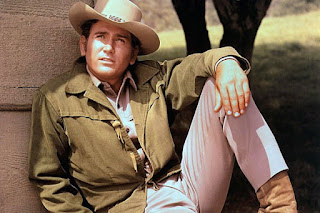 14. Tell us about your first crush: I only have vague recollections, but my mother used to tell me that, when I was a toddler, I was desperately in love with Little Joe Cartwright on Bonanza. She said if anyone punched or shot him, I was inconsolable, to the point that she had a hard time getting me to bed. At first she blamed my tears on the show being one of the only ones in color and that the action was too vivid for my tender sensibilities. Then she realized I didn't react when anyone else got hurt. Just Little Joe.

15. The first time that I became a boyfriend/girlfriend was with who, when? The summer after I graduated from high school I had my first ongoing relationship with the same boy (as opposed to just dates here and there). His name was David.

16. Do you remember what you did on your first date? We went to a school dance.

17. How did you meet your current (or most recent) girlfriend/boyfriend/husband/wife? At work. It's the only place I go!

18. How did your first romantic relationship end? Badly. It was the David from question #15. I feel sorry for him in retrospect. We were so young and of course he wanted to see (and sleep with) other girls before he "settled down." Yet he really liked me and I see now how hard ending it was for him. He tried to be gentle and considerate but I was shattered nevertheless.

19. Do you remember your first kiss? Yes. I was very worried that my braces would spoil everything.

20. What do we still not know about you? I spend a lot of time on my skin care every morning. I accept that I have to age, but I'm trying hard to do it slowly.