If you don't want to be called "deplorable," try not acting deplorably

I know Trump supporters disliked Hillary Clinton's characterization of them as "deplorable." And yet, they keep supporting a man who behaves deplorably, day in and day out. Most gallingly, they wrap themselves in my Christian faith when they applaud this President.

I'm always all for the separation of Church and State because that is one of the foundations this nation was built on. But now I even more vehemently for it because of the pretzel logic today's Christians use to support Donald Trump.

Yesterday, Donald Trump went to Fort Drum to sign the John S. McCain National Defense Authorization Act. Yet he refused to refer to the bill by its official name.

Yes, the most powerful man in the free world was petty enough to deny a dying war hero an accolade. By the way, it bears noting that the war John McCain served in and suffered through is one that Donald Trump avoided because of "bone spurs."

Walk me through how this lack of charity, lack of compassion, lack of humility, is in any way Christian.

This President, who wraps himself in his love of "the troops," has never visited a war zone. Barack Obama visited Afghanistan four times. George W Bush went to Iraq and Afghanistan. We're still at war in the same places. Why won't this President go?

Yet Donald Trump proposed cutting benefits for disabled veterans who live alone. That cut was abandoned once veterans groups read the fine print and exposed it. (You can thank those "enemies of the people," a free press, for giving the veterans groups a voice.)

Walk me through how this hypocrisy is any way Christian.

Keep clapping while Donald Trump pimps the troops for photo ops. Cheer while he disses John McCain one last time. Behave as deplorably as you wish. But please, stop blaming faith for your bad behavior.

This reminds me of Charlotte 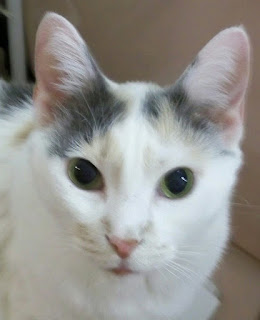 I once had a total diva cat. She never let me forget that she was descended from Egyptian gods.

This one is for you, Girlfriend. 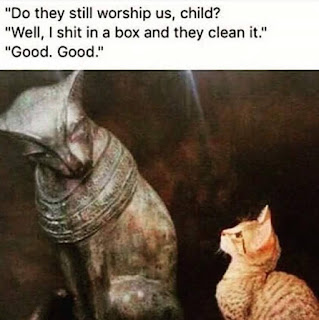 Today's happiness: $18.49. I came home and found a rebate check in my mailbox. "Thank you from Phillips Colon Health." It's like finding $5 in your jeans as you're loading the washer. Only better, since I don't really like having to buy probiotics. So this is like getting that bottle for free.