Today's prompt: What is the best gift you ever received?

It was the Christmas I was four years old. I think part of the reason why the memory is so dear is that I was such a believer. I first saw Blaze on TV, then in the Sears Wish Book. I saw him in the toy department at Sears -- up high so kids couldn't climb on him -- but I stood there and talked to him and told him I would ask Santa to bring him to me. And why wouldn't Santa? I'd been good.

I hoped and prayed, and then ... on Christmas morning ... I walked into the living room and there he was, next to the tree … 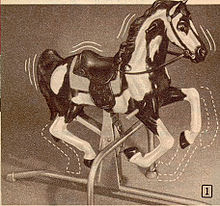 Blaze was no mere "rocking horse." He not only rocked forward and back, I could get him to trot by bouncing up and down in the saddle. Like other Mattel toys of the day, he "talked" (neighed and whinnied) when you pulled the "magic ring."