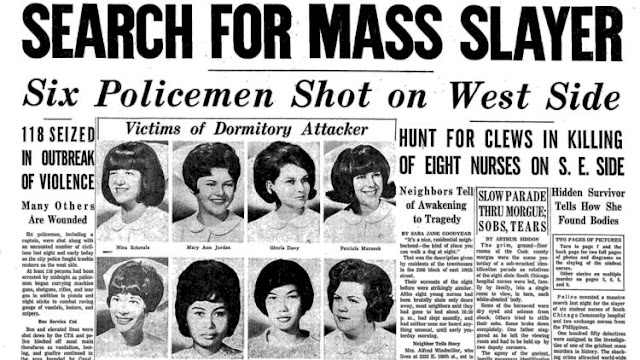 The Tribune's wonderful Mary Schmich ran this 50-year-old front page alongside her column, stating, "It's a time of shootings and protests, shouting and hatred, distant wars that are too close to home and everywhere, it seems, fear. But confusion, violence and fear are hardly new, and if they feel more acute in some moments than others, there's no reason to think they're worse than ever now. For a little perspective, take a look at Chicago 50 years ago."

Oh, how I remember the "search for mass slayer." He turned out to be Richard Speck, the bogeyman of my girlhood. On July 14, 1966, he talked his way into a dormitory and killed 8 of its 9 occupants. The 9th, Corazon Amurao ("hidden survivor" referred on the front page), escaped slaughter by hiding under the bed. From the time the murders were discovered till Speck's capture, I was terrified. There was a thick evergreen bush under my bedroom window and I was certain he was hiding there, waiting to kill my family in our sleep.

I also remember the the riots. Race riots. "Police brutality" and "Daley cops" were the phrases that floated into my consciousness (and would become part of the nation's vernacular during the infamous 1968 Democratic Convention).

Add to that the continuing Vietnam War, which was in the newspapers and on TV every night. DMZ (demilitarized zone) was the buzzword of the summer. My favorite uncle was still "in country" that summer, so those stories were disturbing, too.

But, as Ms. Schmich says at the end of her column, "50 years after that awful July week in Chicago, as we struggle with the problems and fears of the present, it's useful to remember that we're not the first to struggle. We won't be the last. Chicago, always changing, will survive."