1. Type in “[your name] needs” in the Google search: a new liver
Reaction: Well, this game is starting with a very sad story. A mom needed a liver transplant but died before a donor organ could be found. The link was to her family's Facebook page, and the cover photo is the woman's grave, decorated by her daughters' jack-o-lanterns.

4. Type in “[your name] looks like” in Google search: a pit to me
Reaction: There's a dog out there with my name

5. Type in “[your name does] does” in Google search: work that appeals to kids of all ages
Reaction: No, I don't.

6. Type in “[your name] likes” in the Google search: summer in Oakville
Reaction: I suppose I would, as long as it doesn't get too hot

7. Type in “[your name] hates” in Google search: public schools
Reaction: No, I don't!

8. Type in “[your name] goes” or “..has gone” in Google search: over to Arizona's dark side
Reaction: I've never been to Arizona, but I suppose every locale has a dark side.

9. Type in “[your name] loves” in Google search: The Pampered Chef
Reaction: Hah!

10. Type in “[your name] says” in the Google search: Get right with God
Reaction: I'm four-square in favor of that, only I don't believe it's my place to tell you how to do it

11. Type in “[your name] eats” in Google search: cauliflower popcorn Reaction: What? Never heard of it and am not interested in munching on it

13. Type in “[your name] makes” in Google search: mischief
Reaction: It's been known to happen

15. Type in “[your name] will” in Google search: play the villain
Reaction: Bwaaah! That might be fun.

No wonder I drink at lunch

Last week, when I took a few days off, my boss had to handle one of my presentations. It was not a big deal at all. Since we were presenting web banners, which have a very easy-to-understand format, he was able to do it over the phone, saving him a trip downstate to the clients' offices.

Of the six concepts that were presented, four were his and two were mine. At the end of the presentation, our client asked what the agency recommendation was. This is de riguer and I hate it. I mean it when I tell her, "We would never waste your time with creative concepts we don't stand behind," and then I once again topline the benefits of each idea.

My boss, on the other hand, had a clear favorite. One of his. On the call, our client agreed with him enthusiastically but said she had to show the concepts to her boss before she could give us her final choice.

On Friday, she let her know that her boss had overruled her and they were going with one of mine.

My boss was shocked and appalled. You would think they had accused his mother of being a hooker in France during the war. Oh, for Christ's sake, it's a web banner. It will appear on their site for 30 days and poof! It's gone forever.

And, as I was impolitic to point out, we presented it. If, as an agency, we didn't think it was a good concept, we shouldn't have shown it to the client.

That was Friday. On Monday, we had to start on the next month's banners. I showed my boss one that was a logical follow up to the one the client choice so we could leverage the visual and content. He killed it right away. This was just plain petty. If the client had chosen one of "his" ideas (and I consider them all "our" ideas), I would have suggested a continuation of that one, too.

"Let's retire that," he said, taking a bite of his sandwich. RETIRE IT? The original idea hasn't even been seen by the public yet! He has no idea if it will be a success or not, and we're already retiring it?

It almost amuses me that he's so emotionally invested in this. These web banners are ancillary to The Big Project, and while it's high profile, it's kinda boring and my boss has been very willing to let me virtually run it since it kicked off in April. He only got involved with these web banners because I'm finally taking my vacation and he got in front of the client in my stead.

And here's the kicker: Wednesday morning, the client is having a big hush-hush meeting. The title is, "Go/No Go." Meaning that The Big Project -- the thing I've been working on since April, the one I found myself discussing from the courthouse while I was on jury duty, the one I concentrated on instead of finishing my bathroom redecoration or celebrating the Cubs' victory against Pittsburgh -- may be postponed or cancelled. 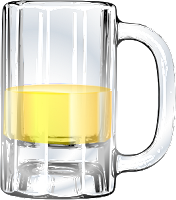 So the fucking banner that my boss hates so much may never be created. Of course, this also means that the 16-page booklet, six-panel brochure, series of six letters, emails, and multi-piece welcome kits that are already being produced may be scrapped, too.

After I heard this, I walked over to nearest dive, ordered a greasy burger and washed it down with beer. Cold, wonderful beer. Don't judge me. You would have done the same.

The last few witnesses have testified in the trial of Nailah Franklin's accused killer. His ex-wife and a former girlfriend described the physical abuse they suffered at his hands. A friend of his testified that they were together in Chicago all day, running errands, on the day Ms. Franklin went missing, and therefore he couldn't be dumping her body and car in Indiana. (Never mind that last week, he had a different alibi.) The accused chose not to take the stand in his own defense.

Tomorrow the jurors will hear closing arguments. Then they will begin to deliberate.

They will consider the cell phone evidence -- the threatening text messages he sent her, the defiant ones she sent in response, and the telltale "pings" that place their cell phones in the same vicinity on the day she died. Then there's the surveillance evidence -- the camera in the garage of her condo building shows them leaving together on the day she disappeared. Then there's his pattern of abusive behavior -- placing his hands on the necks of two other women in his life, relevant since Nailah's cause of death was asphyxiation.* Then there's the crime scene evidence -- her body was discovered in a vacant lot next to a business owned by the accused's brother-in-law, and her abandoned car was found just 10 minutes away. And now, his shifting alibis.

Then finally, after more than eight years, there will be a verdict. Most Illinois murder cases take two years to go from arrest to trial. This one took so long because the accused kept changing attorneys -- at one point insisting he could defend himself -- and complicating matters by committing literally hundreds of serious infractions from behind bars.

In 2007, when he was arrested, Illinois still had the death penalty. Now, as the jury hears closing arguments, it has been abolished.

*Though, to be fair, there is no evidence that she was strangled. Decomposition makes positive determination impossible.
Posted by The Gal Herself at 11/10/2015 01:54:00 AM No comments: