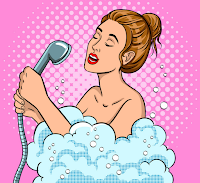 1) In the original animated 101 Dalmations, this song is written by Roger, who gets his best ideas at the piano. Where do you feel most creative? I get great ideas in the shower. I am happiest in the shower. I get so distracted by my big, wonderful thoughts I often forget if I've used conditioner yet.
2) His piano is tucked away in a crowded attic. Does your home have an attic? If so, what do you keep up there? Alas, no attic, no basement. I could use the storage!
3) The inspiration for this song is his wife's old school chum, the very wealthy and very mean Cruella de Vil. Have you ever found you couldn't stand one of your spouse's or lover's friends? Yes. I'm certain it happens all the time, too.
4) Make no mistake, Cruella is a very bad lady. The American Film Institute named her #38 on their 100 Greatest Villains list. Tell us another nasty movie character who comes to mind. I think the Corleones are the most dangerous kind of bad guys because they're so sympathetic. Yes, they are devoted sons and loving dads, but they are also stone murderers.
5) Cruella wanted to skin sweet little Dalmation puppies and make a coat. (We told you she was bad.) As winter wears on, could you use a new coat (though not one made from puppy fur!)? I don't need a new coat, but the one I have could benefit from a good cleaning.
6) This song was written by Mel Leven, who did both words and music. Do you think you'd be more successful as a lyricist (words) or composer (music)? If I had to support myself as a songwriter, I'd starve.

7) 1961 was a big year for Disney. In addition to this animated movie, they had a hit with The Parent Trap, about twins who are reunited at summer camp. Approx. 1 in every 250 births results in twins. Are there any twins in your family? Nope
8) Also in 1961, IBM introduced the Selectric typewriter. Amazon and Walmart both still sell typewriters. Do you own one? Nope

9) Random question: When is the last time you took a nap? Yesterday

After dinner with my friend Nancy and her husband Paul, I got home to find a young man in the vestibule, by our mailboxes. He was reading the names on our boxes and trying the locked doors that lead to either the stairwell or the elevator. He told me something about trouble with his washer and dryer and that he wants to use ours. He was clearly lying, and that's OK. It's cold tonight and I suspect he was just trying to get warm. I didn't engage him, just nodded a lot and made my way to the elevator.

He seemed to be trying to open one of the mailboxes. I tapped on the glass door and told him to stop it. He said, "I have three friends in this building!" Through the door I told him to call his friends and have them let him in, or leave. He said something I didn't understand and then returned to pulling on the locked door.

I called the police. I didn't want to. Homeless people need to be somewhere and on this cold night, I didn't mind him being in our vestibule. I didn't like him trying the mailboxes and front door, though.

Two police cars arrived and a pair of officers questioned him. I couldn't hear what they were saying, but it was obvious he was trying to convince them he belonged here. I watched him leave with the officers, going first to the building to our left and then to our backdoor. I assume he was trying to convince them he knew a resident and knew how to get in.

After about 15 minutes, the police led him to one of their cars and they drove away.

I feel guilty about this. But there were two Amazon packages near the elevator. He was fiddling with the mailboxes. I told him to leave and he didn't. I have a responsibility to my neighbors.

At least, right now, he's warm and comfortable, even though he's in the police station.