Fresh Express sweet butter lettuce in a bag. I'm trying to eat better, and that includes salad. This evening it occurred to me that my dinner -- a Potbelly's chicken salad sandwich -- wasn't all that nutritious, so I threw some of the sweet butter in a bowl and doused it with Thousand Island, and now I feel all virtuous.
Each day in August you are to post about something that makes *you* happy. Pretty simple. And, it doesn't even have to be every day if you don't want it to be. It's a great way to remind ourselves that there are positive things going on in our lives, our communities, and the world.

Paul O'Neal was an unarmed man

Paul O'Neal is a difficult hero to embrace. He's been implicated in the theft of more than 30 cars out in Bolingbrook and Naperville. On the last day of his life, he was caught on video pumping gas, paid for with a stolen credit card, into a stolen vehicle.

But even more disturbing, he was shot in the back by the Chicago police. The bodycam video shows officers going through the dying kid's backpack and finding no weapon.

The body- and dashcams are all over the internet. If you're interested in this case -- or in big city policing in general -- you should view them.

This is how the case appears to unfold to me. O'Neal was reported driving a stolen Jaguar. Two different squad cars begin pursuit and he's caught between them. Someone -- I believe it's an officer in the police car behind O'Neal -- begins shooting at the car. This is in violation of department policy.

The police in the other car apparently believe O'Neal is firing at them. O'Neal crashes the car, jumps out, and runs. He leaps over a fence into a backyard. Police chase after him on foot.

We can't see the actual shooting -- the cop who actually fired is the one whose body cam isn't working -- but we can hear it. Six shots. Into the back of an unarmed kid.

This breaks my heart. I like cops. When I see them, I'm always grateful. I've never been treated with anything but respect.

But what I saw on the videos is just wrong. Police firing live ammunition into a stolen car? That Jag belonged to someone completely innocent in this saga. And what about the welfare of the residents? What if O'Neal had crashed the car into an innocent bystander? What if a bullet caromed off the car and hit someone?

Also, by firing when he wasn't supposed to, that first cop set up the false assumption that O'Neal was armed.

I don't, however, think this racially motivated. However, the motivation doesn't really matter, does it? Stealing a Jag and a credit card isn't punishable by death. And even if it was, O'Neal is entitled to a trial he didn't get.

I do, however, think this is the last thing my city needed during this long, hot summer of violence.

Ha! I own the weekend blogosphere, don't I?

What’s your favorite word or phrase? "Gubernatorial." It's just fun to say. And living in Illinois, where two of our last three governors have ended up behind bars, newscasters unfortunately have many opportunities to use it. Generally "gubernatorial" is followed by "misconduct."


Tell us about a person who made you smile today. It's still early so I haven't had any real-life human interaction yet today. But the local weather man made me smile. It's not going to be that hot today.

What were you doing at 8 am this morning? It's not 8:00 yet. But I will be watching Meet the Press with Chuck Todd. I appreciate his brains, his enthusiasm, and his ability to keep the big picture in clear focus.

What were you doing 30 minutes ago? Feeding the cats. Reynaldo has a special diet that Connie shouldn't eat, so their breakfast requires vigilance.

What is your favorite holiday? Why? Thanksgiving. Since my mother's passing, I've been spending it with my friend, John. It's always such a warm, relaxing, delicious evening, and a great way to officially kick off the holiday season.

Tell us about a visit to another country. The mug on my counter, where I keep the quarters for my laundry, is a memento from the Hofbrauhaus Munchen. I took my one and only trip to Europe when I was in my late teens.

What is the last thing you said aloud? "Connie!"

What was the last thing you had to drink? A glass of milk

What are you wearing right now? An oversized t-shirt that wear as pajamas.

What was the last thing you ate? Last night, I had a handful of Saltines before bed.

Have you bought any new clothing items this week? Nope.

When was the last time you ran? HA!

What’s the last sporting event you watched? The Cubs beat Oakland As ass Saturday afternoon. Look at those standings. 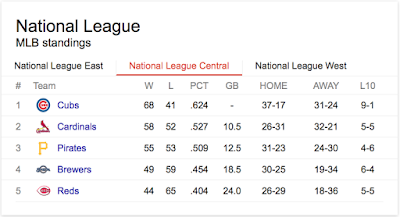 If you could go anywhere in the world, where would you go? If this was an all-expenses-paid trip, I'd take my nephew to Washington DC. He so wants to go, and I'd love to show it to him. But right now, I can't afford it.

Who is the last person you sent a comment/message to on Facebook? My friend, Chuck. I wondered what was up in the continuing saga of White Sox pitcher Chris Sale.

Ever go camping? If yes, tell us about one time. The last time I went camping was about 15 years ago. My niece -- who just graduated from college -- was in first grade. Her mother had just had a baby so I was drafted to play "Brownie Mom" on her first-ever overnight with her troop. I was fascinated by how trusting the little girls were. They'd never seen me before, and yet since I was in the role of "Mom," I had to be OK. I remember sitting down on a bench and this little foot suddenly appeared on my thigh. This wee one didn't know how to tie her own shoe, I was an adult, why not press me into service?

Do you think a tan improves your looks? No. All a tan means to me is more wrinkles and perhaps a mole that will need to be lopped off.

Have you ever lost anything down a toilet? Well, not literally. But I have had to dispose of things that I dropped in the bowl and didn't think I could disinfect properly. Does that count?


What is your guilty pleasure? 1960s-era TV westerns. Especially Bonanza and The Big Valley. The cowboys were all so handsome and good and true. Sigh.

Everything about my movie group made me happy. Yesterday's highlight was a special Saturday night meeting of our classic movie meetup.

Usually we meet one Tuesday/month, and lately we've been concentrating on the films of director Preston Sturgess. But Will, our enthusiastic moderator, introduced another topic -- the films of 1939 -- and we're going through those one Saturday/month.

So yesterday I headed back into the city and into the South Loop. It was a beautiful late afternoon walk from the el stop to the community center where Will shows the films. Often when I take this walk I'm in a hurry -- it's too hot, or raining, or cold, or I'm late. Today I was able to stroll, and appreciate how different the neighborhood looks in summer.

South Loop is an interesting mix of commercial and residential. Apartments cosset the bars, restaurants, salons and daycare centers. I loved seeing all the colorful patio gardens overhead. Old buildings butt right up against newer construction, so it's cool to take in the architecture.

Joanna is traveling this week and was unable to make the Meetup, and in a way, that made me happy, too. I feel such a great affinity for her that when she's there, we tend to talk to each other rather exclusively. When she's not there, I talked more with Betty, Barbara and Barbara's best friend -- a woman who joins us occasionally but doesn't wear a nametag because she isn't a member of the group.

Mme. Nameless was my favorite to chat up because she isn't really a classic movie fan -- she just wants something cheap to do on a Saturday night. She exudes joie de vivre and kept raving about how handsome the movie's star, Tyrone Power, was. All of us movie geeks are already very familiar with Power, so it was fun to see him through new eyes.
Each day in August you are to post about something that makes *you* happy. Pretty simple. And, it doesn't even have to be every day if you don't want it to be. It's a great way to remind ourselves that there are positive things going on in our lives, our communities, and the world.