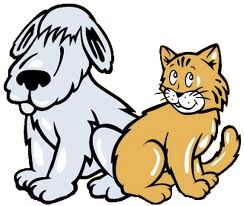 
1. If "happiness" was the global currency, what kind of work would make you a gazillionaire? I'd work with shelter animals. Adopt, don't shop!

2. Would you break the law to save someone you loved?  And, if so, how far would you be willing to take it? I don't know. I remember having this conversation with my mom and grandmother -- both of whom are gone now -- during the OJ trial. His mother took the stand for him, and at the time it seemed so exploitative it made my skin crawl. So I asked Mom and Grandma what they'd do in Eunice Simpson's position.

Their answers surprised me. My mother said "yes," she'd show up in court and lie under oath if she had to in order to save her child -- no matter how old that child was or what that child had done. Mom said the maternal instinct to protect was too strong. Grandma said "no." She thought it would be important for her son's soul to pay for what he'd done. (Though it must be said Grandma went to her grave believing OJ was innocent. She simply couldn't believe any man would throw away his wealth and freedom over a woman he'd already divorced.)

3. Is it possible to really know the truth without questioning it first? Wow. I think it depends on the situation, and the truth we're considering.

4. Do you remember that one time . . . oh, about 5 years ago or so . . . when you were really, really upset? Does it really matter now? If not now, then when? Yes. It mattered then and it matters now. It doesn't gnaw at me now like it did then, but thinking about it can still upset me. (Gee, thanks for bringing it back up again!)

5. Is it possible to know, without a doubt, what is good and what is evil? No. Of course not. Because for an act to be truly good or truly evil, intent and motive must be considered. Only God can see what's in another's heart. I'm not arrogant enough to think I have that ability.

6. What would you do differently if you knew nobody would judge you? I'd do karaoke.

7. Would you rather have less work to do, or more work you actually enjoy doing? More work I enjoy.

8. Would you rather be an anxious genius, or a tranquil fool? I've thought about this often. Tranquil fool, definitely!

9. Are you more worried about doing things right, or doing the right things? Yes. (I put a lot of pressure on myself sometimes.)

I had kind of a grumpy day Saturday. I devoted three -- count 'em, THREE! -- hours on the phone, first to Comcast, then to Apple, trying to solve the Mystery of the Intermittent Internet. NOT how I wanted to spend my sunny Saturday!

So let's not concentrate on that. Instead, let's consider sights seen around town.

In honor of Easter, I dropped a bag of food off at the food pantry. Boxes of mac-and-cheese and Rice-a-Roni, tuna and jars of baby food. None of that would be on the menu for a festive holiday meal, but it's all stuff the average household can use. Besides, the volunteers wouldn't get it onto the shelves in time for Saturday's 9 till noon distribution.

On the way, I passed two individuals who had just picked up monthly allotment. They were both seniors. One was pushing his wire shopping cart in front of him, the other was pulling hers behind. I surreptitiously glanced into their bags. He had eggs on top, she had lettuce. It made me happy that the food pantry was able to distribute fresh foods in addition to canned and dry. But it made me sad that this is where they are at this stage in their lives. I saw my own mom in them. I wish that they had someone to send them a little money each month so that they wouldn't have to wait in line to "shop the pantry."

Later in the day, in front of my building, I ran into a girl and an older man. (Daughter and dad?) I believe she said her name was Katie. She was taking photo after photo of the building, which I must admit is really not very attractive. You wouldn't know it by her enthusiasm. The restored Grand Central Station wasn't photographed this extensively for Architecture Digest.

They just placed a bid on #307. It's a newly-renovated unit downstairs, laid out like mine but in much better shape. I don't know who paid for it, exactly. (Was he there as an advisor, as a roommate, or because he laid out the downpayment?) But she's definitely going to be living here.

I loved how different their questions were! She wanted to know if I thought it would be worth it to have a washer/dryer installed in her unit. (No, I'd prefer not to sacrifice the closet or counter space when we have a laundry room in the building.) He wanted to know if I heard the train all day and all night. (Yes, but as a woman who lives and alone and commutes, I find it comforting to have such a short, safe walk from train station to front door. This made him happy.) They both wanted to know about parking, which amused me. Whenever two or more people from this community get together, they complain about parking. So these two will fit right in.

I liked her spirit and her energy. And I'm jealous. There's so much I'd like to do to improve my home and she's moving into a freshly painted and redecorated place. Well, good for you, Katie. I hope you're happy here.

All that he's seen

Last week, Cubs Hall of Famer Billy Williams came out onto the field and received a World Series ring. He hadn't played for the Cubs since 1974, but he's part of the team. Not only in the hearts of the fans but as part of the Cubs organization, acting first as batting coach and now as "senior advisor." 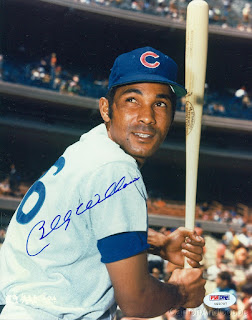 To old-time fans like me, he's "Sweet Swinging Billy." I grew up on him. He was a perennial
All Star. A fixture in the outfield. He was handsome. He was reliable. #26 was so much more mature than the other eight Cubs in the line up.

In 2008, I finally found out why when I read his autobiography. Born in June 1938, he grew up in the segregated south. His extravagant natural gifts led him to professional baseball, and his first exposure to overt racism.

The year was 1959. He was a talented 21-year-old black man who filled the stands and thrilled the fans by day. But once he left the field, he no longer felt like an adult in the white man's world. He couldn't eat with his white teammates. He couldn't stay in the same hotels. The discrimination was so hard for him to bear that he left the team and went home to Whistler, Alabama.

Buck O'Neill, a member of the Cubs organization, visited Billy at home and spent two days trying to convince him to rejoin baseball. Billy did, but now he had an emotional distance, a cool persona that would always make him seem more businesslike than flamboyant, like an adult determined to excel at a boy's game. 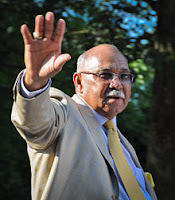 Last week, at age 78, he finally got a World Series ring. He strode onto Wrigley Field and was hugged by the current Cubs coaches and management. That includes Laura Ricketts, Cubs co-owner and board member, and Brooke Skinner, Laura's wife.

That's right. He was hugged by a white woman, and by that white woman's lesbian partner, in full view of 41,000 people.

I bet if you told 1959's Billy Williams that would happen to him, he would call you crazy.