No retreat, baby, no surrender

It's been a week since Prince died. As always happens these days when a celebrity dies unexpectedly, he's everywhere. Social and mainstream media are ablaze with purple. This has me thinking about the last time Prince was everywhere, 1982-1986.

I have great affection for much of the music of that period because those were my "I don't give a shit" party girl days. I worked very hard at having fun. Because that's when fun mattered. Perhaps because not much else did.

After all, these were the Reagan years. In this country, the powers that be were all about "self determination" and "pulling yourself up by your bootstraps" and "trickle down economics." Which translated to wealth remaining in the hands of the few at the expense of the many, to making it sound at best unfashionable and at worst unpatriotic to make things like nutrition and education and equal rights standard issue.

I am a Kennedy girl. I believe in inclusion and activism. I want to participate in the system. I consider it both a responsibility and privilege to try to affect change. And instead I was dancing and snorting coke and getting drunk and getting laid because what the hell. My way of life seemed so over. What difference did any of it make? It hurt to be a Kennedy girl in Reagan Country. So I anesthetized myself while Prince and Michael and Whitney and Madonna sang.

Why not? Why not put myself first and indulge in a little hedonism? Since nothing mattered, there were no guardrails. After all, the 1960s were very, very over. JFK and Bobby had been murdered, and Chappaquiddick had rendered Teddy toothless. (Though it must be said he recovered and became a wonderful Senator.) Dr. King had been murdered. Not only had The Beatles had broken up, John Lennon had been murdered. I can't overestimate the nightmare impact those shootings had on me.

I'd quit going to church long before. It stopped being relevant. The problem wasn't my faith, it was my religion. The congregation I'd been raised in wasn't about social responsibility and had become about self promotion and self preservation. There was an emphasis on bringing in new members and raising money to improve the building and beautify the grounds but to what end? Weren't we supposed to be helping the needy or something?

The standbys were still there, of course. Paul McCartney was making good music, with "Take It Away," "My Brave Face" and "Here Today" being just three of my favorites from this era. (But his hits, such as "The Girl Is Mine" and "Ebony and Ivory" were crap.) The Cubs were putting very, very good teams on the field (Rick Sutcliffe! Ryne Sandberg!). 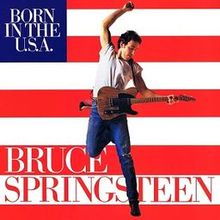 While there was fun, but there was no joy. Unless I was listening to Bruce. The Boss was my
conscience. He reminded me that I was part of something bigger than myself, and the next party. Old school, unreconstituted liberals like us still had a role to play as The Loyal Opposition. He insisted that there was responsibility attached to being "Born in the U.S.A."

As he sang -- and still sings, since he's touring now:

Those are lyrics to my favorite Springsteen song, "No Surrender."

I met him, you know. I kissed him, too. It was a great moment in my Fangirl-dom. He was sweet and sexy and smart and he talked to me about John Lennon. (John's death was sticking a shocking, fresh wound.) It was transformative.

Slowly, through The River, Born in the USA and Tunnel of Love, Bruce brought me back to myself. I began volunteering again. First, and longest, in the cat adoption room at The Anti-Cruelty Society and for a time at ICHV (Illinois Citizens Against Handgun Violence). I found a congregation of neighbors who lived their faith, joined them and eventually converted. Having places I needed to be on Saturday and Sunday mornings reminded me that there's a value to waking up sober.

I don't regret any of those hours partying with Prince and Michael and Whitney and Madonna. It was an important period for me. I felt sexy, cool and hip for the first time in my life. It was fun, but it wasn't really me. It took Bruce to bring me back to myself -- my uncool, socially responsible, geeky self -- and I'll always be grateful.

And now of those 1980s icons, Prince and Michael and Whitney are gone. Madonna and Bruce are still out there. Still touring. Here's Bruce at 66 from this past March, singing "Badlands" and "No Surrender." Still the hardest working man in show business. As we mourn the fallen, let's never forget to celebrate the survivors.