Saturday 9: Mairzy Doats (1944)
Unfamiliar with this song? Hear it here.

1) While today this is considered a children's song, "Mairzy Doats" was a #1 hit and a staple on radio stations in 1944. Do you know any of today's most popular songs? (Here's this week's Hot 100.) Nope. I recognize the artists (Dua Lipa, Lil Nas X, Ed Sheeran, Ariana Grande, Justin Bieber) but not the songs. This exercise made me feel most unhip.

2) One of the song's writers recalled that the song was inspired by an old English nursery rhyme. Tell us a rhyme you remember from childhood. "Jack be nimble, jack be quick, jack jumped over the candlestick and burned his pants off." That's exactly the way my mom taught it to me. I was very lively and mischievous as a child and she was terrified I'd actually try the candle thing, so she tried to make the rhyme a cautionary tale. I was so embarrassed when I recited it at school and my teacher called me a "smart aleck."

3) This week's group, The Merry Macs, was formed by three brothers -- Judd, Joe and Ted McMichael -- who learned to harmonize at home. Did you grow up in a musical household? Not at all. My dad liked to sing along with the radio in the car, and I always had music on in my room, but that's it.

4) When the McMichaels decided their new group needed a woman's voice, they asked Cheri McKay to join them. Realizing all their names began with Mc, they began calling themselves The Merry Macs. Have you ever performed with a singing group? (Yes, that garage band you played in after school counts.) If yes, what was your band called? I have nothing for this.

5) The Merry Macs' first gigs were playing high school dances. Do you have any memories of school dances you'd like to share this morning? For some reason, the first memory that popped into my head was from junior high. The first time I danced with a boy was to a song called "Things I'd Like to Say." I found him on LinkedIn and  he's now a "retired investor."

6) Once their recording career took off, The Merry Macs went to Hollywood. They appeared in a film with the comedy team of Abbott and Costello. Who last made you laugh? PJ, who works at the vet's office. I don't recall what she said, exactly, but she always makes me laugh.

7) In 1944, when "Mairzy Doats" topped the charts, sunscreen was invented. It was first developed to protect soldiers during WWII, and that original formula was sold to Coppertone. Do you regularly use sunscreen? It's been so hot, and I've been working so hard, that I've seldom been outside this summer. This makes me sad.

8) Also in 1944, a board game called Murder! was introduced in England. In 1949 it made its way to the United States and was renamed Clue. It's still popular today. Can you name any of the original 6 "characters" in the Clue game? (Extra credit: One was replaced in 2016; who was it?) Mr. Green, Professor Plum, Mrs. White, Miss Scarlett, Mrs. Peacock. That was from memory. I know Mrs. White was replaced by Dr. Orchid, but that's because I looked it up. The game my nephew and I often played included the original six.

9) Random question: The new house you just bought comes with a big mirror on the ceiling of the master bedroom. Would you take it down or leave it there? It would have to come down before I even slept there. I can't imagine waking up and having the first thing I see is  my reflection with smeared mascara and messy hair. YECH!

I chose red and blue intentionally 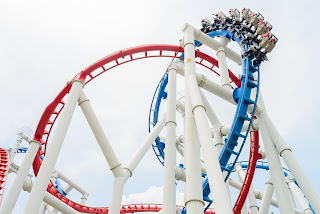 This roller coaster is Cardinal red and Cubbie blue, and it represents how I feel about baseball right now.

24-hours ago, I was miserable. Cubs President Jed Hoyer made it plain that trades would be made ... and soon. Met fans on Twitter were jubilant that Kris Bryant would be theirs before the end of the month. Since KB puts the BRY in BRYZZO, I was bereft.

Then Boston fans started gloating that my favorite most Cub, Anthony Rizzo, would soon be returning to the Red Sox, the team that signed him when he was still a teenager battling cancer. They are gleefully anticipating Rizz leading them to a World Series in an ending befitting a Hollywood movie. Losing Rizz would break my heart in more ways than I can count.

The end of Bryzzo. I want to cry,

Then my guys rallied today to beat the arch-rival Cardinals most decisively. The team on the field today didn't look like they'd just lost an epic 10 straight. Bryzzo each got a hit!

I am happy. I celebrated with a creamsickle float.*

*The latest offering at the local ice cream shop: Fanta orange soda and vanilla custard. I highly recommend it.

When the photos of 6'5 Barron Trump appeared yesterday, and memes comparing him to NBA players cropped up, Chelsea Clinton pleaded with the tweeters to just stop.

We can recall the bullying tweets posted by Barron's father. Candidate Trump made fun of Heidi Cruz' face. The President of the United States did not think it was beneath the dignity of the office to call people he didn't like "dopey," "low class slob," "dummy" and "clown."

We can all remember Barron's father honoring Rush Limbaugh with the Medal of Freedom. Rush famously called 13-year-old Chelsea "the White House dog."

We all know Barron's mother spread birther lies about Barack Obama without pausing a millisecond to consider how this would impact Sasha and Malia.

And yet noisy Christian Conservatives question the direction of the country with Democrats in charge, all the while holding the Trumps near their hearts.

I really, really want my faith back.

In the meantime, I'm so grateful that we now have a gentleman (how's that for an old-school term?) who is a gentle man in the Oval Office. Take his trip to Miami after the condo crisis. He touched the arm of  Gov. Ron DeSantis and said, "Just tell me what you need." He did this even though DeSantis appears to be preparing to run against him. "We aren't going anywhere," he said, sitting across from Sen. Marco Rubio, showing solidarity with the Republican lawmaker when it comes to Federal response. Think about that. Biden was sharing the limelight with a member of the opposition party. Can you imagine Donald Trump (Mr. I Alone Can Fix It) doing that?

President Biden thanked the workers who are trying to recover bodies. It wasn't that long ago that elected Republicans refused to support the Capitol Hill police -- who protect them! -- with a formal investigation into the January 6 riot.

Somehow President Biden managed to not callously fling paper towels at anyone while in Florida.

Going back to what I was taught in Sunday School, this month Joe Biden and Chelsea Clinton have demonstrated Christian values.

At least he checked in

Got a quick text from John today. He saw a doctor for the first time since 2019. He reports that she changed his medications and their dosages, hoping that will enhance his energy level and his life. She also scheduled an MRI and "heart tests" for him.

I'm relieved. He has been feeling so rotten over the last 3-4 months, I was afraid she was going to admit him. I'm grateful he was able to just see the doctor and then go home.

I'm also grateful that he remembered to let me know. Often when he's sick, he withdraws. I get it, because when I don't feel good, I just want to recharge and heal. But what John forgets is that I care about him. When I don't know what's going on with him, I'm stressed.

So this two sentence text -- received when I was waiting for my order at Panera (which they botched) -- was positive. Not only is he getting care, he's taking my feelings into account.