Me and my camera 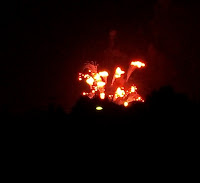 The view of the fireworks from my 4th floor living room window is perfect ... and unphotographable. I kept getti 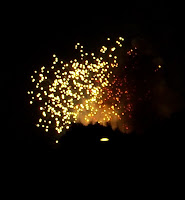 ng my own reflection and the weave of the drapes in each shot. So I went downstairs to the front steps and the lighting and angle were all wrong.

So this is the July 4 that I will remember for spending watching the fireworks through my camera (which I obviously still haven't mastered) instead of in the sky. Here's the best I could do, trying to capture the rockets' red glare over the treetops.
Posted by The Gal Herself at 7/04/2010 10:51:00 PM 2 comments:

About the Cubs Curse

The Cubs were ahead 2-0 and then, somehow, ended up losing 14-3. I watched the game and still, am somehow not sure how it happened. Believe it or not, things may be looking up, since Friday we lost 12-0.

So it got me thinking about
The Curse.
According to legend, it dates back to 1945, the last time the Cubs made it to the World Series. Sam Sianis, owner of The Billy Goat Tavern*, brought a goat named Murphy to the ballpark.

He even bought a ticket for Murphy. It was a warm day, Murphy's unique goat-y scent began to annoy other fans, and word came down from Cubs' owner PK Wrigley himself that Sianis and Murphy were to be ejected from the park. As he left the ballpark, Sam loudly placed a curse on the team and the park itself: "The Cubs will never win a World Series as long as a goat isn't allowed in Wrigley Field!"

The 1945 Cubs lost to the Tigers and haven't appeared in a Series since. They haven't won a championship since 1908.

Then, of course, there were the 1969 Cubs. I actually remember this. The line-up of that team can still tug the heartstrings -- Ron Santo, Fergie Jenkins, Billy Williams and Mr. Cub himself, Ernie Banks. They were up by 9 1/2 games in September. Somehow a black cat made it's way onto the field in New York and the Cubs lost to the Mets ... that day and consistently until they somehow blew the lead completely and watched the Mets take their place at the top of the NL and win the World Series.

And, of course, there's Fucking Steve Bartman. (Yes, I have been told that "Fucking" is not his real first name, but I have seen no proof.) In 2003, when the Cubs were in the playoffs against the Marlins, that fan reached out of the stands at Wrigley Field, trying for a souvenir and interfering with the game, preventing left fielder Moises Aloe from catching the ball. And making the out. The Cubs lost momentum, and the playoff series, and their chance for glory.

We have tried to Reverse the Curse. Many Greek restaurants serve goat as a special during the season, often performing exorcisms. A goat has also been ceremoniously welcomed into the park, brought by one of old Sam's descendants. As you can see below, the Bartman Ball was actually exploded publicly at Harry Caray's Restaurant.

And yet ... we continue to lose unloseable games under ridiculous circumstances. I don't believe in The Curse, exactly. But sometimes it seems like the only logical explanation left.


* The Billy Goat Tavern also claims to be the inspiration of the "cheezburger, cheezburger" skit made famous by John Belushi on SNL.
Posted by The Gal Herself at 7/04/2010 08:08:00 PM 3 comments:

Keep our soldiers in your prayers today

Enjoy your 4th, and remember who makes this long weekend possible.

I'm asking God to keep each of them safe until they come home ... whether it's individually because their tours are over or collectively because the conflict has been resolved.

No one won the Illinois State Lottery last night 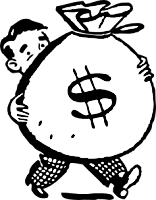 That includes me, of course. But I prefer to look at it as the pot will be even higher for tomorrow's drawing!

I realize there are those who believe that playing the lotto is a waste of money. But I prefer to look at it as $2 for four grids means hours of fantasies, which is a good deal.
Posted by The Gal Herself at 7/04/2010 08:05:00 AM 3 comments: