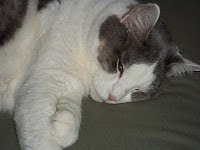 Today's happiness: Joey. How I love this cat! So much so that today his visage replaces Augie's.

We met in the mid-1990s. His previous owners had unceremoniously dumped him at the local animal shelter -- in a sealed box, on a cold December morning -- because they could no longer afford him. A dangerous, irresponsible act, but a desperate one, too. Because Joey's heart is so open and loving that it's obvious that he's never known anything but affection from humans. So the people who cared for him during his first three years clearly did care for him.

Joey is a cat's cat. He liked play fighting and chasing. I have enjoyed watching him build relationships with the other cats in the household. First he took the role of junior partner to my late Billy. Now, with Reynaldo, he's the elder statesman. The problem is Charlotte, our resident diva. She simply hates Joey. Always has. Hated him on first sight and sees no reason to change her assessment. Every day, Joey begins a new, approaching her in friendship. And every day she hits him on the head. It's been going on like this since the Clinton Administration. Considering the difference in their sizes -- Joey is enormous and Charlotte is petite -- he could annihilate her, but he never would. Joey is inexhaustibly gentle.

Joey is my purr box. It's a deep, low rumble. All I have to do is touch him and he turns it on. He loves to lay on his back, turning his tummy to the sun. (When my mom stayed with me for a few days, she noted that his soft, white, furry tummy looks like clouds.) He follows the sun from room to room. He loves hearing his name, and his favorite sentence is "Joey Joey Joey Joe." Except for thunder and going to the vet, he fears nothing. He views every person he encounters as a friend he hasn't met yet and a head-rub waiting to happen.

He's sitting with me as I compose this. He brings the happy, every day. His tender, trusting nature is a blessing. 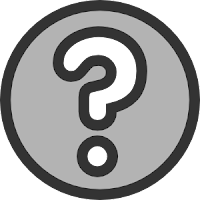 As I have written many a time, I am worried about my job stability. Between reorganization at my client's offices, which will change their needs, and a merger between the agency network I work for and our arch rival, the ground beneath my feet feels anything but solid. We have gone months without enough work to really support the three creative teams we have assigned to the account.

I figured that if there were to be lay-offs, they would happen on or around August 15. Middle of the quarter, that's when the corporation likes to do it. For some reason it makes it easier for their bookkeeping.

Now, as August 15 approaches, we have been preparing for a major new project. Tuesday we devoted 90 days to a pre-meeting, discussing timing and resources. I suppose under other circumstances the scope might sound daunting, but I have been so eager to show how much I can do, and how well, that I am nothing but enthusiastic.

EXCEPT ... my friend Tom had meetings scheduled for that entire day back in February (middle of the quarter), when he was let go.

So I want to relax, but I'm afraid to.