The younger one was touched deeply by the Bernie Sanders campaign. He was inspired to become a election judge, the first step in what promises to be a lifetime of involvement. The older one posted memes like this. 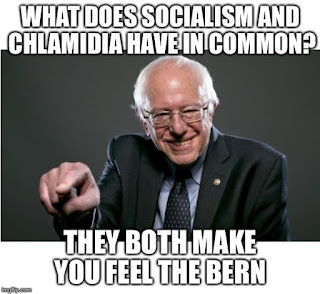 Now there could be a lot of reasons why the older one does this. 1) His Beevis/Butthead side laughs at chlamydia. 2) He's in the Navy and military culture doesn't encourage free thought or sensitivity. 3) He's incredibly immediate, and since he doesn't think beyond hitting "post," it doesn't occur to him that he could be offending his biggest fan.

But it did and it does. I asked my younger nephew what's going on with the older one -- specifically I wanted to know if he may be getting married soon, because I'd want to send a gift.* I was surprised to hear my younger nephew say, "I don't know. I don't follow him on social media anymore."

This made me so sad.

So it's come to this. Our political discourse has become this coarse and this cruel. This casually cruel.

We're so in love with labels. My "progressive" cousin believes his own mother is "a racist homophobe" because she voted Trump. My "conservative" aunt calls her oldest son's political activism "puerile." They didn't talk on Christmas. They didn't talk yesterday, on his birthday.

I read the other day that progressives believe it's "important" for Rachel Maddow to call Paul Ryan and Donald Trump racist. I remember when the Right believed it was "important" for Barack Obama and Hillary Clinton to label "radical Islamic terrorism"

I do not like this President. I cannot actually comprehend that he is, indeed, President. I struggle getting my mind around the fact that he was elected.

I refuse to believe that half the country is racist and hatefilled. Certainly it's possible that Donald Trump is, but labeling him as such just makes his supporters feel disrespected and they will dig in.

I refuse to believe that Bernie Sanders ever wanted to be a wrecking ball and destroy the fabric of the government he's participated in for more than 25 years.

I refuse to believe that Hillary Clinton is a disease-ridden felon.

I refuse to believe that Barack Obama is just about anything I've heard him called by the alt-right.

But it seems I'm alone in the minority. It feels like my fellow Americans are obsessed with labeling one another, stereotyping one another, dividing us into "us" and "them."

I don't like what it's doing to my family or my country.

*No matter how old he is, he'll always be a big, dumb kid and I'll always have a soft spot in my heart for him. Regardless of his politics. 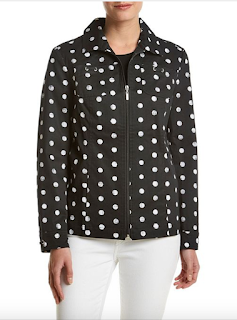 I bought this jacket yesterday at Carson's (that may be Bergner's or Bon-Ton or Younker's in your part of the world). It's lined, and the sleeves hit me correctly. I got 35% off, which made me happy.

Unzipped, it looks less casual. I'm going to wear it with a white blouse and black slacks, accessorizing it with a silver chain/pendant.

I'll wear it for a client presentation, but I bought it in case I need to go on interviews. As I near 60, I'm less and less confident that there's another full-time job in advertising waiting for me, so I want to hang on where I am as long as I can.

But I have no idea what the future holds, and it's good to be ready. I should also develop an online portfolio. I haven't yet. I think that would make my perilous situation feel more real.