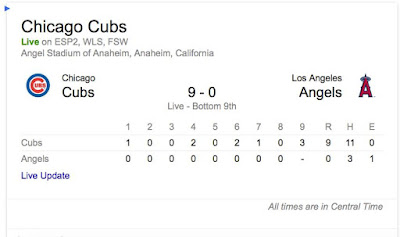 Seared on my soul

When I was 10 years old, I thought I was highly sophisticated. I wasn't, of course, I was in fifth grade. I had a 9:00 bedtime. I'd never met a Jew or Hispanic and the only black I'd ever interacted with was May, who had been our once-a-week cleaning lady.* But I felt very grown up. After all, I watched the news at 5:00 and lie on my tummy each day and flipped through two of Chicago's daily newspapers.

I remember hearing about Dr. King's murder. I was alone in the living room, watching a show about The Beach Boys, when an announcer broke in with A SPECIAL BULLETIN. It made me sad, but it didn't rock my world.

But the riots did. Chicago burned. It was very scary. Even to a sophisticate like me.

I saw this speech, given that evening in nearby Indianapolis. I understood what he was saying, even if I'd never heard of Aeschylus before. The first time I saw it, my throat closed up a little and I almost cried, because I so got him. It was not lost on me that as Chicago was in violent turmoil, Indianapolis was safe.

The obvious conclusion: Bobby Kennedy could keep us safe.

That he was often photographed with children -- his own brood or his fatherless niece and nephew -- climbing all over him, or with his dog Freckles, enhanced that image as the man who could take care of us all. His murder, just a matter of weeks later, left me heartbroken.

Watch this speech. If you've seen it before, watch it again. Delivered on the back of flat bed truck, to a predominantly African-American crowd who had yet to learn that Dr. King had been shot. The signs he asks the crowd to lower were BOBBY signs.  That piece of paper in his hands was the campaign speech he had planned to deliver but never did.

It seems almost obscene to mention in this context but today's GOP front runner recently proclaimed, "I bring rage out." Shame on him.

*May was the first person who ever called our home and asked for me. It was a summer Saturday between second and third grade. She wanted to make sure I knew The Beatles were going to be on The Ed Sullivan Show the following night. I felt terribly grown up.
Posted by The Gal Herself at 4/05/2016 02:05:00 AM 2 comments: