I had dinner Wednesday night with my friend, Barb. I hadn't seen her in a while and was happy to see that she's taking care of herself. Oh, she was wearing a "boot" because of a sprained ankle, and she showed me a bandage covering the stitches on her arm -- remnants of a nasty fall. But still, she looks pretty good. Her color was good, she's keeping up her hair, she accessorized her outfit -- all little things that indicate she's taking care of herself.

She's packing up her home, the home they shared, preparing it for sale. It's very slow going, but she's doing it.

She got a new puppy, Lily. The puppy has had health problems, which has kept her busy.

She bought a new condo, just a studio, because even though she 's selling her home here in Chicago and retiring to Hilton Head, she still wants to retain a base here.

She sees a therapist every week.

People tell her "to move on." I told her to tell them to go fuck themselves.

We're not mass produced. We're individuals. We're like snowflakes, no two of us are exactly alike. That means we each have our own story, our own pain, our own path to healing.

August 8, 1988 is a big deal in Wrigley Field history. It was the end of one era and the beginning of another as the Chicago Cubs became the last MLB club to have lights in their home ballpark.


My current favorite Cub -- and definitely one of my most loved EVER! -- Anthony Rizzo was born on August 8, 1989. Being the fabulous human he is, he is commemorating his 29th birthday with a fundraiser at a local grocery store chain. We're invited to donate a $1 to his pediatric cancer foundation at checkout. (Of course I did! He's Rizz!) 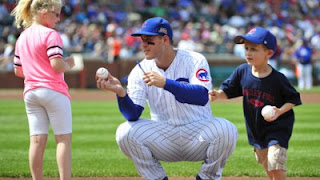 August 8 and August 8, just one year apart. Clearly Anthony Rizzo was born to be a Cub!