The Missiles of October

It's been exactly 50 years since John F. Kennedy saved the world. 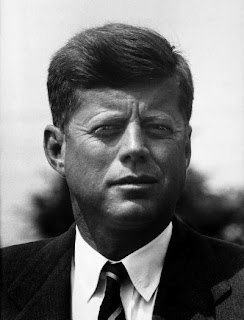 Yes, it was that important. The Cuban Missile Crisis was that dangerous. The President was that heroic and wise.

A decorated Naval hero, Kennedy knew war and never stopped trying to avoid it. And he remained steadfast in his belief that Nikita Krushchev, a diehard Communist, was still at heart a man like him who loved his children and all children and didn't want to see the world blown up by nuclear war. That's why Kennedy so imaginatively gave his adversary a way to both extricate himself from the situation and still save face among his countrymen and political adversaries within the Soviet Union.

President Kennedy celebrated our similarities and our ties to this fragile planet. That's why this is one of my favorite of his quotes:

“All of us have in our veins the exact same percentage of salt in our blood that exists in the ocean, and, therefore, we have salt in our blood, in our sweat, in our tears. We are tied to the ocean. And when we go back to the sea – whether it is to sail or to watch it – we are going back from whence we came.”

To paraphrase a comment made by his son and namesake, John F. Kennedy may not have been a good man but he certainly was a great one. God was smiling on us when He put Kennedy in the Oval Office 50 years ago.