Come home ... head to bathroom ... wash hands ... remove mask ... soak mask in the sink with a squirt of shampoo ... wipe first my nose and then my phone with alcohol.

It occurred to me this evening that I don't even really think about the corona virus accoutrement anymore. It's just a part of life. I'm only reminded of the pandemic and peril when I turn on the Cubs game and see all those empty seats in the stands.

I suspect the very ordinariness of it means we're half way done with this global tragedy and a vaccine will be available around February. For I believe that's how life works: as soon we become used to the masks and sanitizer, we can put them away.

I do wonder about the sillies out there who refuse to believe the threat is real and deny that masks help. Do they rage every time they approach their dwellings, ripping off their masks, licking the door knob and yelling, WHERE WE GO ONE WE GO ALL?

When I was a teenager, I read Pete Hamill all the time. In those pre-internet days, this required me to visit the library. Pete Hamill was worth it.

His prose was clean. His insights were sharp. He was a big city guy who wrote about big city guys -- Sinatra,* Muhammad Ali, Jimmy Breslin, Norman Mailer, Joe DiMaggio. He was a hard drinking city guy himself. I think I was a little in love with him.

I think she was, too. To celebrate his life on the day of his passing, I give you his words on the woman he knew, certainly dated and likely bedded but never discussed during her lifetime. 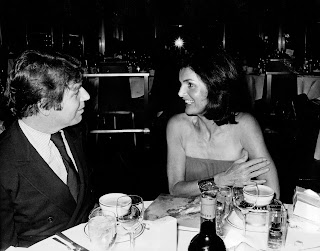 This Pete Hamill column was published in New York Newsday May 22, 1994.

We were on a train heading south through the June afternoon, carrying another Kennedy in a coffin to the dark permanent earth of Arlington. I was sitting in one of the crowded cars with Jose Torres, who had been the light-heavyweight champion of the world. He had torn his Achilles tendon in the gym and his right foot was in a cast and we were talking, and trying to make jokes to erase grief, glancing out at the ruined faces standing beside the tracks.

I was drinking then. I saw an old man standing at attention, saluting, and I turned away and sipped my whiskey and then, coming down the aisle, there was Jackie Kennedy.

She was moving slowly, stopping to murmur words of consolation to this person and that; and then came to us. Jose introduced himself and then me. She shook our hands and asked about Jose's leg.
"I know Bobby loved you guys," she said. "I'm so sorry."

The words were simple and correct, of course; so was the stoic grace, the refusal to weep in public, cry to Heaven for vengeance, or issue some gushing demand for pity.  But there was something unstated too, moving around in her eyes, present in the coiled tension of her stance. She was bitterly angry. In 1968, with Martin Luther King gunned down and now Robert Kennedy, she wasn't alone.
That morning in St. Patrick's Cathedral, anger stained the air; it was here on the funeral train too, impossible to tame with either words or whiskey. The murder of Jack Kennedy provoked horror and grief, the killing of Robert Kennedy, a generalized absurd fury.

Jackie Kennedy, as everyone called her then, had been to King's funeral in April; now she was part of still another, less than five years after the bloody finality of Dallas. American public life was beginning to resemble a death cult and in her eyes, and the slight tight-lipped shake of the head, she seemed to be wondering if the killing would ever end.

The train rocked slightly; she didn't lose her balance.  She turned to console someone else and then she was gone. Four months later she married Aristotle Onassis.

After the marriage to Onassis, of course, much bitterness was directed at Jackie herself. Three public versions of the same woman emerged, often warring with one another: Jacqueline Bouvier, Jackie Kennedy, Jacqueline Onassis. By refusing to play forever the role of Jackie Kennedy, Grieving Widow, by resisting the demands and hypocrisies of the cult she'd helped create by telling Theodore White it was like Camelot, by insisting instead on her right to live, Jacqueline Bouvier invited the pikes and lances. In the process, she made a brave and difficult life.

A decade after Robert Kennedy's death, after Onassis had died, and after Jackie had begun to build her life in New York, we went around together for a while. I don't know of any public figure whose public image was at greater variance with private reality.  "I picked up the newspaper today," she said one evening, "and read this story about this absolutely horrible woman — and it was me."

She did not retail herself, of course, did not work the talk show circuit or give interviews or issue press releases. The absence of information was filled with gossip, rumor, the endless human capacity for malice. She was able to immunize herself from most of this with irony and detachment, laughing at the more overblown printed fevers. She understood that she was the stuff that tabloid dreams are made of, combining in one person the themes of sex, death and money. But she could be wounded too.

"I just don't understand sometimes why they work so hard at hurting me," she said. "There are so many more important things to do."

Books have been written about her; more will come in a ceaseless flood. I hope they all make clear how much she loved her children and the man she once described to me as "this young handsome guy who later became president." Loved them: and the geometries of the French language, the marbled acres of the Metropolitan Museum of Art, the lanes and green surprises of Central Park, the light of the Mediterranean. She loved riding horses through the fields around Bernardsville in New Jersey and loved rogues, too, men who reminded her of her father, Jack Bouvier. She is one of the few women I ever met who could be equally comfortable with Jimmy Breslin and Andre Malraux.
Her intelligence was subtle and surprising. She could discuss characters from Proust and dances by Fred Astaire. She had a wicked sense of humor, saw sham when it appeared, had little patience for fools, expressed herself with wit.

She worked hard at editing, reading more manuscripts at home than ever were published, urging people into good work. And she could write too. Her notes were models of grace and precision. The most appalling thing about the suddenness of her death is that she apparently never wrote her memoirs, she who had so much to remember. "Sometime, when I'm old and creaking," she said, "maybe I'll write some of all that."

Instead, she wrote notes to people who were in trouble, to men whose wives were dying, to women who'd lost their men. The world was full of the wounded. She had the gift of sympathy, which is rarer than we all care to admit, and brought it more often to the hurt than to the triumphant. She was gracious with strangers, particularly people astonished by the sight of her, amused by the absurdity of her own celebrity, but never cruel or dismissive to those who thought it was important. She used that celebrity for decent causes: the saving of Grand Central, the campaign to rehab 42nd Street, the curbing of Mort Zuckerman's skyscraper on the edge of Central Park. In those and other endeavors, she wasn't assembling scrapbooks; she was being a citizen. Most of the time, she hung the celebrity in the closet like a dress, and lived her life.

She didn't need to do any of these things. She could have lived out her days in icy exile in Europe, hugging some mountain in Switzerland, walled away from the world in some personal fortress on the Riviera. She chose instead to live in New York, a city as wounded as she was.

In the last decade, when every sleazy rumor about Jack Kennedy was treated like fact, she maintained her silence.  And silence, of course, is communication.

Now, in silence, she will make her own final journey to Arlington. To be forever with the man she loved, long ago. God bless.

Today's happiness -- Afternoon nap. I expected our 11:00 AM client Zoom meeting to be consequential. I was primed and ready to do the work for Tony, a client I really like and especially want to deliver for, but he really isn't ready for us.*

So here I was at 11:30, adrenaline pumping and no Tony project! I made myself a big lunch (steak and mixed vegetables). OK, now it was 12:15. I knew no one would be calling upon me for anything for at least an hour, so I took a nap. It was glorious!

Hurry-up-and-wait happens all the time in advertising. But before work-from-home, I wasn't able to wind down with a refreshing nap.