10 on Tuesday -- About Robert the Demon Doll 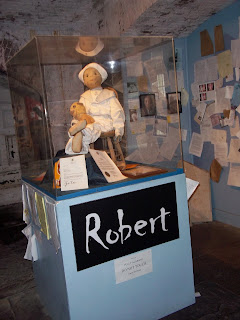 The tale of one of Key West's most famous (infamous?) residents:

1) In the late 1890s, Thomas Otto hired a woman to care for his young son, Gene. This nanny was quite familiar with voodoo. His nanny gave Gene a doll that he named Robert. This doll became Gene's imaginary friend ... and then some. His nanny told him that Robert was special, magic, that Robert could do all the things Gene wanted to, but couldn't.

2) Gene believed his nanny. Throughout his youth, whenever he got busted doing something naughty, Gene would say simply, "Robert did it." His parents got tired of this and took Robert away, tucking him away in the attic.

3) Decades later, after his parents died and Gene inherited the house, he rediscovered Robert. Even though Gene was now an adult, he and Robert picked up where they left off. Allowances were often made for Gene's "artistic temperament" (meaning he was a wealthy nut), but even his wife found Gene's fixation with Robert unsettling.

4) Mrs. Otto insisted her husband leave Robert at home when they went out, and Gene responded by constructing a special room for his beloved friend. Everything was scaled to Robert's 3' size. Gene maintained that Robert liked to sit by a window, watching the world go by.

5) This is when neighborhood children began reporting strange happenings. Robert and his chair would move, unaided, from one side of the window to the other. Or the drapes would move so Robert could glare more directly at any kid who dared mock him.

6) Unfortunately rumors also abounded about Mrs. Otto's abuse at her husband's hand. Legend has it that when asked about it, Gene acknowledged that his wife and his imaginary friend were indeed rivals, and that frequently Robert lashed out. But Gene claimed of the abuse and battery, "Robert did it!"

7) Socially isolated because of her husband's loony behavior, Mrs. Otto didn't feel a great affinity for Key West. In the 1970s, shortly after her husband's death, she left, abandoning Robert in the house. The new owner took Robert out of his specially appointed room and gave him to the family's little girl, who had the temerity to treat him like a mere "toy."

8) Robert was displeased and lashed out. The girl was plagued with nightmares. As the story goes, she would awaken and report that she dreamed she was being tortured, saying, "Robert did it!" 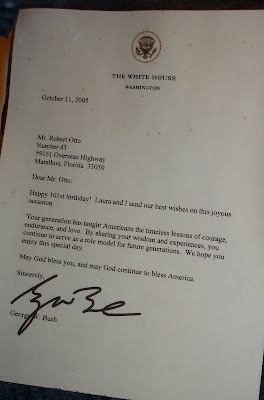 obert resides in a Key West museum, safely behind glass. He's still in his special chair, still wearing his favorite sailor suit and clutching his own plush toy, a lion. He's surrounded by tons of fan mail from children and adults who maintain they have experienced his powers. For example, a pair of tourists rode their mopeds to see him. The husband mocked Robert, calling him ugly and dismissing his legend. On the way back to their hotel, the man blew out a tire while his wife's bike was fine. Others maintain that if Robert is in a bad mood, he doesn't allow photos to be taken and cameras will malfunction in the museum all day. Whenever anything happens with no logical explanation, the popular refrain is "Robert did it!"

10) Robert's celebrity continues to grow. Even President George W. Bush sent a note of recognition on Robert's 100th birthday. (Though you can see from the letter that the 43rd President doesn't seem aware Robert is a demon doll.)
Posted by The Gal Herself at 1/04/2011 12:18:00 PM 3 comments: