Today’s happiness: Talking to contractors. I interviewed a pair today -- one recommended by my friend, Nancy, the other from Home Advisor. They are each putting together proposals for renovating my bathroom.

I'm leaning toward Nancy's guy because he seems to be willing to do more for me, whereas Mr. Home Advisor is leaving some stuff to me. Of course, I haven't seen their estimates yet. So maybe that painting and prep will cost me a lot. I simply don't know yet.

But here's the thing: the two consults went smoothly. This is a very big deal for me. I've never done anything this expensive and consequential before. Yet neither contractor seemed even remotely rattled by how crappy my bathroom currently looks. Neither seemed appalled by the clutter in my living room (though they weren't able to see in the den, which still looks like a disaster area). Neither seemed to be taking advantage of my frankly admitted naiveté.

Who's a good boy?

Reynaldo is a good boy! This morning, after breakfast, he took a nap and he was so cute. He was dreaming, and suddenly sat upright, turning his head this way and that, all while still sleeping. Finally, he curled back into a fur shrimp. 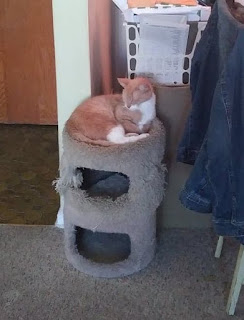 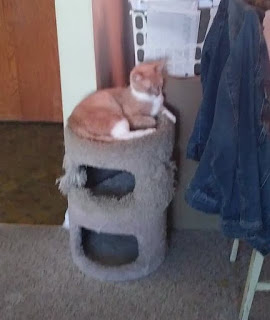 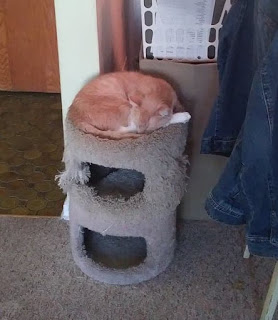 He is 14 now. That makes him about 72 years old in human years. He is still exasperatingly naughty at times. Still lively -- as you can see above, even in his sleep. But he naps now, more than ever. So much so that his partner in crime, Connie, is getting bored. And he's had some health problems. Easily handled, but still, they make me realize our time together isn't long.

This afternoon, I made him happy by putting him in his carrier and taking him to the park. From his vantage point in the shade, he saw a squirrel and a bird and blades of grass moving. Being Rey, he was fine as long as he knew as I was there beside him. I'm still his obsession.

Today's happiness: This blog. Sometimes I'm just so grateful to have a place to express myself, and to know people out there are hearing me.

Earlier the year I sent out a valentine to Kwizgiver and Snarkypants. They came through when I had the blues and it was the sweetest, most unexpected rescue.

Today I want to shout out to BookMama and Lisa G. BookMama is in Chicago with her children, seeing Hamilton. I have been following their activities via Facebook, but I've been enjoying them so much because we got to know each other here, on Blogger.

Lisa G. gave me a heads-up at the perfect moment. She sent me a link to a credible story about the FDA extending the expiration on some Epipens ... including the one that's in my purse! That will save me a ton by allowing me to wait and order my Epipen from my insurance preferred vendor. Thank you, thank you, thank you.