1. The strangest place you've ever been. I never considered it "strange," but I remember seeing raised eyebrows when I went to Hot Springs, AR, year after year. It boasts nice, affordable -- if not luxurious -- spas, good food and some wonderful natural wonders. For example, I love this waterfall. The water flowing over the rocks is just naturally 143º, which accounts for the steam. It's completely enchanting. 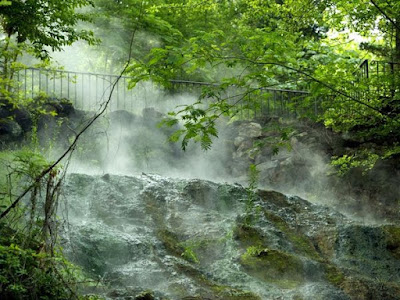 2. Unusual food combinations you enjoy. I prefer ketchup on my fish to tartar sauce. Don't judge me.
3. Your best cure for hiccups. Waiting them out.
4. Something you have never done but would like to try. A horse-drawn sleigh ride through the snow.
5. A routine you do every day without fail. I cleanse, exfoliate, and moisturize my face each morning. (I wish I was as dedicated to skincare at night.)
6. Something new you've recently learned. I'm reading a book about Princess Diana, a memoir by her personal secretary. I didn't realize how much behind-the-scenes diplomatic work the Royal Family does for the UK. They are very effective trade ambassadors, and their overseas trips (like Megan and Harry's recent jaunt to Australia) do benefit their subjects.
7. Your keenest sense. Righteous indignation.
8. Whether you prefer cooking or cleaning up. I don't mind doing dishes.
9. Where were you the last time you saw the sun rise. At the airbnb suite I stayed in while my bathroom was being remodeled. It was right here in my hometown, but the windows face east whereas mine here at home face west. It was something of a revelation to see the sun go up over the treetops. 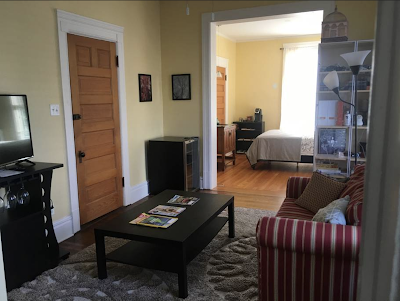 10. A recent time you were embarrassed. In June, I literally walked into a glass wall. I'd been taking painkillers for my kidney stone, but thought I was OK. I kinda wasn't. I should have worked from home. My cheeks still burn when I think of it.
11. An everyday sound that delights you. Cat purr.
12. The last conversation you had with a stranger. I enjoyed chatting with my Uber driver yesterday.

A slice of pizza, a side of concern

I had lunch with my nephew yesterday. It's the last time we'll see each other until he comes home again for spring break.

It was good to see him, of course. It amused me to see how typical he is in some ways. Saturday saw our first major snowfall of the season. He showed up looking like a snowman himself, literally covered with the white stuff. But that's because he was wearing a Cubs cap and a fabric jacket for protection. Nothing to deflect the flakes and moisture. He has an umbrella -- I know because I sent him one. But he left it in his dorm room, 200 miles away. To borrow from Chandler Bing, could he be more of a teenage boy?

As he snarfed down his pizza, he told me about how he's looking forward to the new semester. He's got geography (which he considers the only yawn), creative writing and an important class on American government. The last is a three-hour lecture, one night/week, with his favorite professor. He's enthusiastic, but he finds it daunting, as well. We talked that through, though. The professor will download his overheads, so if my nephew doesn't completely trust his notes, he'll have a back up. This professor has also demonstrated a willingness to meet with my students outside of class.

So while this seems to worry my nephew a little, it doesn't worry me.

What does concern me is his social life. He's been home for a month, and has seen none of his high school friends. He brushed it off, saying the only one he's interested in is Xander, and Xander spent Christmas with his father in Milwaukee.

My nephew and his parents -- especially his mother -- are close. If it made him happy to cocoon with his folks, that's great. But my nephew has suffered from depression in the past. I wish I knew for sure that his withdrawal from the local social scene was only that and not something more serious.

I didn't know how to ask without sounding intrusive or hovering. I just tried to create an opening he could dive into and share.

Instead he wanted to tease me about my obsession with Anthony Rizzo's wedding ("I expected no less from you"), talk about the movie Vice (which he liked better than I did), and get my opinion on the pathetic specter of a President so sleazy he's been investigated by his own FBI (yes, you Donald Trump).

So I will try to shake my worry and remember how comfortable he seemed over our lunch. (I don't know if I'll be successful, of course, but I'll try.)