Someone threw a bomb into the clown car 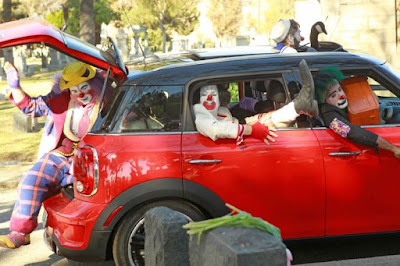 Came around the corner today, toward our cramped little four-people-in-an-office-designed-for-two space and saw telltale green and white packing boxes.

"Fuck," said I, ever eloquent,"Are we moving again?"

Two of my coworkers/officemates just stared at me blankly.

"Are we moving again?" I repeated.

"I was let go," the taller, skinnier coworker said, proceeding to put his personal belongings into his box.

"Me, too, and Charlie," said my rounder, friendlier coworker, referencing one of the few creatives who doesn't work in our cramped cubicle.

I started to sweat. "How did you find out?" I asked.

"Phone call," Tall said. I looked at my phone but didn't see the message light. I dropped my purse and computer bag and went looking for my boss. He was talking to AD.

"Do you want to talk to me about anything?" I asked.

"Nope," he said. "I mean, of course I want to discuss this with you. But it's done and it's over and this is as far as it goes."

So yesterday there were six of us on the team. Today there are three.

I'm comforted that I made the cut, and my boss said later it wasn't even "a close decision" as to which writers and art director he would keep. On the other hand, it's sad to see people over 50 lose their jobs. Round friendly coworker has a speech impediment, and is desperately uncomfortable with the thought of interviewing.

And it's nice to know that I'm not nuts. I mean, I knew something was up. I'm intuitive enough to sense the change in the political barometer, but not to understand what what it all meant.

But it's sad. It's disruptive. It's sobering to remember that, in advertising, it's more unusual to be kept than it is to be let go.

30. What do consider the best thing about starting a blog?

It's a real-time snapshot of my life. It reflects my real self, in all my wisdom and folly. I think it helps me be a better person.

Something that should give Bernie Sanders pause 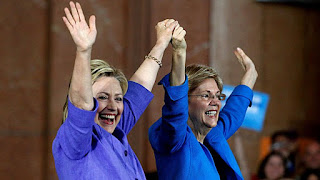 As I watch Sen. Elizabeth Warren on the stump with Hillary Clinton -- and know Joe Biden and Barack Obama are just weeks away from joining Clinton on the campaign trail -- I wonder how relevant Bernie Sanders remains.

I know he still has his passionate supporters, but their numbers are dwindling. As well they have to.

I mean, can anyone truly say with a straight face that Joe Biden, Barack Obama and Elizabeth Warren aren't liberal "enough?" Or (to use Trump's word) "crooked" and just in the arena for their own self interest, to just continue benefiting from the status quo? Does anyone still think that if an indictment of Hillary was still in the offing, Syracuse law grad Joe Biden, U of C law professor Barack Obama and Harvard law professor Elizabeth Warren would support her?

I don't dislike Bernie Sanders. I don't not support Bernie Sanders. After Philadelphia, I will work for the Democratic nominee. Because for me, it's never been about Bernie and Hillary. It's about:

So all this has got me thinking about Ralph Nader. When I was growing up, he was revered as the man we could count on to speak truth to power. Unsafe at Any Speed took on the auto industry. He helped establish the Public Interest Research Group. In Illinois, PIRG is a loud voice for smart transportation reform and food safety. Nader has been tireless in fighting to protect pensions and Social Security and Medicare/Medicaid.

He should be lauded as a liberal hero.

Except for his stubborn 2000 Presidential Campaign. Because of his quixotic quest, nearly 100,000 Floridians cast a protest vote for him. And George W. Bush won Florida -- and the Presidency -- by less than 600 votes. We can parse the theories as to whether the math holds up, and I know there are those who maintain Nader took as many votes from Bush as Gore. They may well be right. But here's the deal: Nader is no longer remembered first as a crusader. Now he's known as the ultimate spoiler.

Often -- perhaps even usually -- protesting feels soooo good. Being heard is a good, empowering thing. But sometimes by protesting, we find ourselves living the old "cut off your nose to spite your face" adage.

I hope, for the sake of our country and his legacy, Bernie Sanders understands it.

*OK, maybe that means it has been about Bernie and Hillary.
**OK, so this is why in my heart of hearts I wish Biden had run.