1. What are you currently reading? Murder at Archly Manor by Sara Rosett. Set in England in the early 1920s, this book introduces pretty young Olive Belgrave. She has a specific problem: money. Her family is prestige rich but newly cash poor.

She needs a job but she's too well-bred for most jobs and not qualified for others. She visits family for a few days and soon finds herself working to clear a cousin accused of murder. Olive discovers she's a natural, if unconventional, sleuth, and a career is born!

So far I'm enjoying this book. It's so perfect in its time and place. People live in places called Tate House, Parkview and Archly Manor. Men are named Sebastian, Alfred and Jaspar. Women wear hats with plumes. Everyone says things like, "One really shouldn't, should one?" And yet, there's a murderer among them! They're really no better than us declasse Yanks, are they?

2. What did you recently finish reading?  The Watergate Girl by Jill Wine-Banks. Today she often appears as an MSNBC legal analyst. Now in her mid-70s, she seems wise, self-effacing and careful. But this sedate lady was once a trailblazer. Decades ago, she was "the Watergate Girl," the young mini-skirted lawyer who was on TV and in the newspapers every day as the only woman on the team of special prosecutors assigned to Watergate.
After the drama and consequence of bringing down a corrupt President, she had a hard time adjusting to private practice. She took a job as General Counsel of the Army at the Pentagon under Jimmy Carter. Once again, she was a trailblazer, advocating for women in the military.
This is as much a story of her personal life as it is of her career. She may have been a trailblazer but not a radical. She had a hard time extricating herself from a terrible marriage. She was the oldest daughter of a family in the Chicago suburbs. She was expected to get good grades, to behave, to make a good marriage and stay married. I found this part of the book almost as involving as Watergate. While more than a decade younger, I am familiar with this milieu and attitude. I understand her concern with disappointing those who have expectations.
I just read Katie Holmes has purchased the rights to this book. I hope it actually makes it to the screen.
3. What will read next? I don't know.

The Thompson Center -- aka The State of Illinois Building -- has always been one of my favorites. I'm afraid I'm in the minority on this. Constructed mostly of glass, it's difficult to cool in summer and heat in winter. New leaks spring up constantly and are almost impossible to detect/repair in a timely manner, which had led to mold. Tenants complain that they can smell and hear the basement food court.

But I love it. I love looking all the way to the ceiling and then down to the floor. I love the Christmas Tree in the lobby. I love the food court.

And so right now I'm sad. 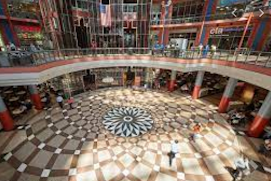 First the State officially put the building up for sale. The only restrictions are that the new owner must keep the el station (not disrupting service) and keep the name (James R. Thompson was IL's longest-serving, never-indicted governor). That won't preclude the building being torn down. In fact, it's far more likely than not that it will go. It's across the street from City Hall, central to the court houses and not far from the theater district. I understand why this would be the perfect location for a more functional and efficient office building with a prestige restaurant at street level (along with a Walgreens or CVS, or maybe a Dunkin or Starbucks; we seem to need a drugstore or coffee shop on every other block). 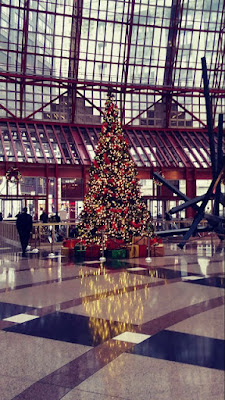 Then this weekend, the architect died in a terrible bike accident. Helmut Jahn pedaled into an intersection and was hit by two different cars from opposite directions. He was pronounced dead at the scene. He was 81.

I suppose it's a blessing that he won't have to endure interviews when his creation is destroyed.

He also designed the United terminal at O'Hare. There's a pedestrian tunnel between the concourses with a neon ceiling. It always makes me happy when I come down the escalator and see the red and blue lights. I wonder how many travelers enjoy it every day.

Helmut Jahn enhanced my city life. I'm grateful to him.